Abstract
Mammaliamorpha comprises the last common ancestor of Tritylodontidae and Mammalia plus all its descendants. Tritylodontids are nonmammaliaform herbivorous cynodonts that originated in the Late Triassic epoch, diversified in the Jurassic period and survived into the Early Cretaceous epoch. Eutriconodontans have generally been considered to be an extinct mammalian group, although different views exist. Here we report a newly discovered tritylodontid and eutriconodontan from the Early Cretaceous Jehol Biota of China. Eutriconodontans are common in this biota, but it was not previously known to contain tritylodontids. The two distantly related species show convergent features that are adapted for fossorial life, and are the first ‘scratch-diggers’ known from this biota. Both species also show an increased number of presacral vertebrae, relative to the ancestral state in synapsids or mammals, that display meristic and homeotic changes. These fossils shed light on the evolutionary development of the axial skeleton in mammaliamorphs, which has been the focus of numerous studies in vertebrate evolution and developmental biology. The phenotypes recorded by these fossils indicate that developmental plasticity in somitogenesis and HOX gene expression in the axial skeleton—similar to that observed in extant mammals—was already in place in stem mammaliamorphs. The interaction of these developmental mechanisms with natural selection may have underpinned the diverse phenotypes of body plan that evolved independently in various clades of mammaliamorph.
Systematic palaeontology
Synapsida Osborn, 1903
Cynodontia Owen, 1861
Mammaliamorpha Rowe, 1988
Tritylodontidae Cope, 1844
Fossiomanus sinensis gen. et sp. nov.
Holotype. A skeleton with broken skull and partial dentition (accessioned as Jinzhou Paleontological Museum (JZMP)-2107500093).
Locality and horizon. Jiufotang Formation at Lamadong, Jianchang (Liaoning province, China); Aptian stage (about 120 million years old) (Supplementary Information).
Etymology. Fossio, ‘digging’ and manus ‘hand’; sinensis, ‘from China’ (Latin). 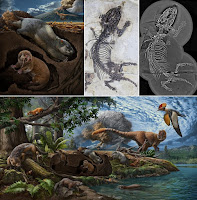