With over 2400 species in 123 genera, Lycosidae is one of the largest spider families (WSC 2017). For over two hundred years, the type genus Lycosa Latreille, 1804 have accumulated large-sized wolf spiders from all over the world. Thus, with 218 nominal species, this genus is distributed in all zoogeographical regions (WSC 2017). Almost none of the species currently classified in Lycosa appear to be related to the type species—L. tarantula (Linnaeus, 1758); hence, the genus is polyphyletic and should be divided into several genera. This process has been already started; for example, in Australia and New Zealand where many of large wolf spiders have been removed from Lycosa (Roewer 1955, 1959, 1960; Vink 2002; Framenau & Baehr 2016). Also, some Holarctic, Neotropic and Afrotropic species were transferred from Lycosa to other genera (for a complete list of references see WSC 2017). In the Palaearctic, Lycosa is represented by 60 species (WSC 2017) and remains almost unrevised. From the southern Palaearctic, Saharo-Gobian desert region (Yemel’yanov 1974), 36 species of Lycosa have been recorded to date, 6 of which are poorly described (WSC 2017).
Keywords: Araneae, Lycosidae, Lycosa 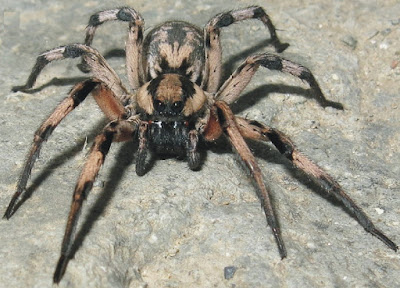 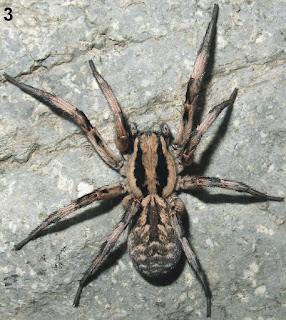 Diagnosis. Lycosa aragogi sp. nov. differs from other species of the genus by having two well-developed anterior epigynal pockets and a deep incision between them (Fig. 1, indicated by arrow).

Remarks. According to taxonomic characters for Lycosidae proposed by Zyuzin (1990), L. aragogi sp. nov. belongs to subfamily Lycosinae Simon, 1898: this species has large size, high cephalic area of carapace and setae on epigynal septum. Based on the morphology of male copulatory organs, Dondale (1986) divided Lycosinae into Lycosa and Trochosa groups. A similar subdivision was made by Zyuzin (1990, 1993) based on both male and female morphology. He divided Lycosinae into two tribes: Lycosini Sundevall, 1833, characterised by non-anchor-shaped epigynal septum and Trochosini Zyuzin, 1990, characterised by anchor-shaped epigynal septum. According to this character, L. aragogi sp. nov. should belong to the Lycosini. As reported by Dondale (1986), representatives of the Lycosa group include Alopecosa Simon, 1885, Arctosa C.L. Koch, 1847, Hygrolycosa Dahl, 1908, Lycosa, Melocosa Gertsch, 1937 and Varacosa Chamberlin & Ivie, 1942. Zyuzin (1993: 699) proposed to include in Lycosini “members of Lycosa s.str. with their very peculiar genitalia, and some allied species referred to ‘Allocosa’, ‘Hogna’ and probably Metatrochosina (Roewer, 1959-1960, figs 124, 126, 129, 219, 304-305, 517)”. In general, the structure of vulva of L. aragogi sp. nov. is similar to those of L. praegrandis and L. tarantula (Fig. 2; Logunov 2010: fig. 27), by having massive folds (invaginations), which are perhaps copulatory ducts. We placed L. aragogi sp. nov. in Lycosa on the basis of structures of vulva and shape of septum, which is not anchor-shaped. Still, presence of anterior epigynal pockets distinguishes L. aragogi sp. nov. from L. praegrandis and L. tarantula. To our opinion, L. aragogi sp. nov. has quite peculiar structure of epigyne and probably should belong to a separate new genus. This problem could be solved after studying the copulatory organs of the males.

Etymology. This species is named after Aragog, the famous fictional spider from “Harry Potter” book series by J.K. Rowling, in a reference to the similarities between this species and the animatronic puppet version of the character used in the film “Harry Potter and the Chamber of Secrets”, which is actually based on a wolf spider.

Comments. The habitat was a mountainous area with xerophyte vegetation, mostly consisting of Astragalus sp. The specimen was collected from inside its burrow, which was made in a stony slope. Somatic characters (carapace profile, scopula and spinules on legs) of L. aragogi sp. nov. are equivalent to structural and functional features of burrowing wolf spiders, as proposed by Zyuzin (1990).