Abstract
Strophidon McClelland is a muraenid genus with characteristic appearance of a very elongated body, a large mouth cleft and anteriorly placed eyes. The nomenclature and taxonomic history of species within Strophidon are contentious and its members are easily misidentified. In the present study, species of the genus Strophidon are revised based on morphological and molecular data, and five species are considered valid, including S. dawydoffi Prokofiev, S. dorsalis (Seale), S. sathete (Hamilton), S. ui Tanaka and a new species, S. tetraporus. Strophidon tetraporus sp. nov. is described based on 15 specimens from Indonesia, the Philippines, Taiwan and Vietnam with the unique characteristic of the constant presence of the fourth infraorbital pore among species of Strophidon. The intraspecific variation of vertebral formula within S. dorsalis is discussed based on molecular data. Muraena macrurus Bleeker and Thyrsoidea longissima Kaup are synonyms of S. sathete that can be distinguished from the most similar congener S. ui by a longer tail, smaller eyes and more inner maxillary and inner dentary teeth. A key to identify species of Strophidon is provided. The distribution and maximum size of each species are also re‐evaluated.
Keywords: Muraenidae, new species, phylogeny, redescription, Strophidon, taxonomy 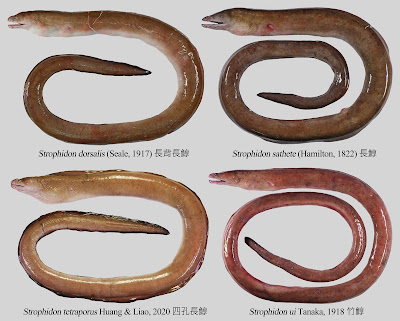 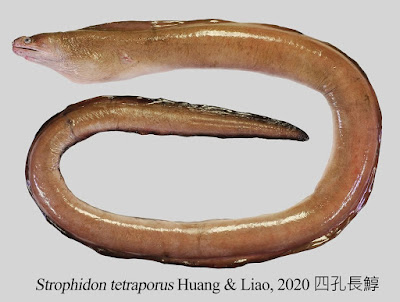 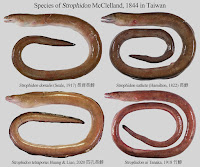