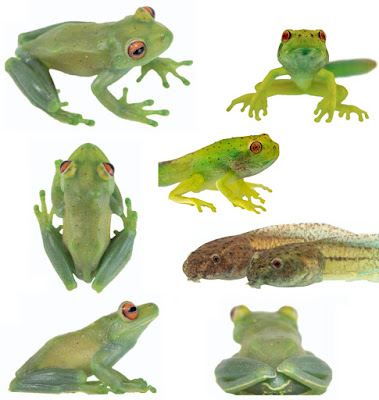 Abstract
The genus Aplastodiscus currently includes 15 valid species, and a further five candidate species have already been pointed out in the literature. We here describe one of these candidate species, assigned to the A. albosignatus group, from the southeastern slopes of the Espinhaço Range, State of Minas Gerais, Brazil. The new species is cryptic with A. cavicola, being morphologically similar in both adult and larval stages. However, the two species are not sister taxa. The advertisement call of the new species is markedly distinct from all other known species of its genus. Examination of topotypic samples of A. cavicola corroborates the presence of this species in the Espinhaço Range, but also indicates the need for a revision of the taxonomic status of populations from the state of Rio de Janeiro assigned to this taxon.
Key words. Amphibia, Anura, bioacoustics, conservation status, Neotropics, phylogeny, tadpoles, taxonomy, systematics. 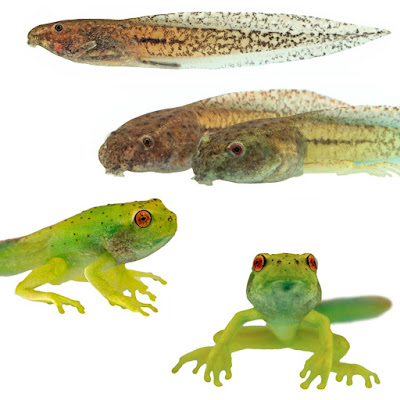 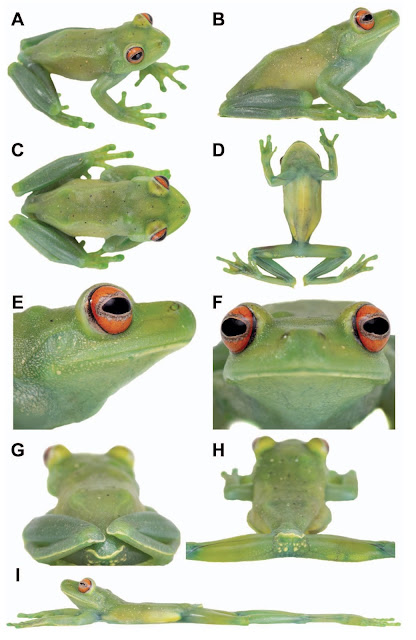 Aplastodiscus heterophonicus sp. n.
Diagnosis: A green treefrog species of the genus Aplastodiscus characterized by adults with (1) small size (SVL 26.9–33.6 mm in males; 28.3–33.6 mm in females); (2) a well-developed supracloacal crest (character “present, restricted to the supracloacal region” of Berneck et al. 2016); (3) presence of webbing between fingers and toes; (4) presence of lateral fimbriae on forearms and shanks; (5) absence of nuptial pad in males; (6) in life, iris red to orange with a dark grey to silvery ring around the pupil; (7) small fringe of guanophores on lower lip margin (same as “white submandibular dermal fold” of Berneck et al. 2016; Bezerra et al. 2020); (8) no sexual dimorphism in SVL. Advertisement call (9) composed of scratchy notes partially pulsed to pulsatile; (10) presence of ascending frequency modulation; (11) call duration 167–280 ms; (12) peak frequency between 661.3 and 947.5 Hz. (13) Tadpoles with LTRF 2(2)/4(1); (14) oral disc with single row of marginal papillae; (15) with an anterior gap; (16) absence of posterior gap; (17) presence of few submarginal papillae laterally in the oral disc; (18) absence of small flaps with labial teeth laterally in the oral disc; (19) absence of paired light spots in the posterior portion of the body; (20) presence of dark longitudinal stripes in the tail, one between dorsal and ventral myotomes of muscle, restricted to the proximal quarter of tail length, and an interrupted narrow brown line on the dorsal margin of the muscle; (21) tail homogeneously marbled along its length; (22) presence of translucent fins.
Etymology: The specific epithet derives from the Greek words ἕτερος (“heteros”), which means different, and φωνή (“phoné”), which means sound (and, also, the voice or cry of animals). The radicals heter- and phon- are linked through the connecting vowel -o-, followed by the Greek suffix -ικός, latinized as -icus, to form an adjective. The resulting specific epithet, heterophonicus, means “the one with a different voice”, in allusion to the very distinct call of the new species of Aplastodiscus described here. 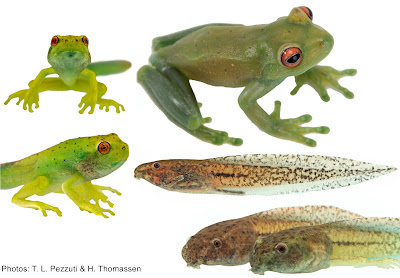 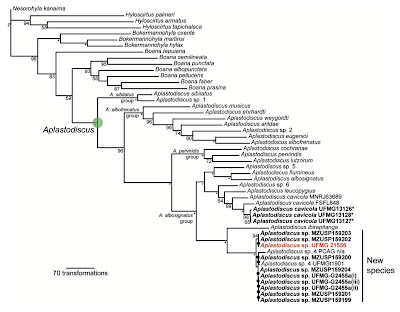 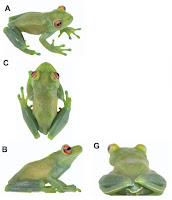