Abstract
Elasmosaurid plesiosaurian remains have been documented from non-marine to paralic (fluvial to estuarine) sediments of the upper Campanian Dinosaur Park Formation (DPF) of southern Alberta since 1898. Despite this long collection history, this material has received relatively little research attention, largely due to the highly fragmentary nature of most recovered specimens. However, this assemblage is significant, as it constitutes a rare occurrence of plesiosaurian remains in a non-marine depositional environment. This study reports on a recently collected and prepared specimen, which represents the most complete elasmosaurid yet collected from the DPF. This specimen preserves the trunk region, the base of the neck and tail, a partial fore and hind limb, and tooth, and is sufficiently complete to be assigned as the holotype of a new genus and species. This new taxon is diagnosed by a distinctive character state combination including a boomerang-shaped clavicular arch with acute anterior process, convex anterolateral margin, deeply embayed posterior margin, and pronounced ventral keel, together with the presence of 22 dorsal vertebrae, and the anterior dorsal centra bearing a ventral notch. The DPF plesiosaurian fossils were recovered from both estuarine/bay and fluvial palaeochannel sediments. The holotype skeleton represents an osteologically mature individual with an estimated body length of around 5 m, although the largest referred DPF elasmosaurid might have been closer to 7 m, which is considerably larger than other plesiosaurians reported from non-marine deposits. This suggests small-body lengths relative to typical elasmosaurids from marine settings, but is consistent with other plesiosaurians recovered from non-marine sediments. The identification of a distinct elasmosaurid taxon in the DPF might be evidence of niche-partitioning among the predominantly oceanic members of the ubiquitous plesiosaurian clade.
Systematic Palaeontology
Sauropterygia Owen, 1860
Plesiosauria De Blainville, 1835
Elasmosauridae Cope, 1869
Fluvionectes gen. nov.
Fluvionectes sloanae sp. nov.
Holotype: TMP 2009.037.0068/1990.046.0001/.0002, partial skeleton consisting of a tooth, posterior cervical vertebral series, the complete pectoral, dorsal, and sacral vertebral series, the anterior half of the caudal vertebral series, ribs, gastralia, partial pectoral and pelvic girdles, and a partial fore and hind limb.
Type locality and horizon: Sage Creek Provincial Grazing Reserve, near Onefour, Alberta. Precise locality data on file at the TMP. TMP 1990.046.0001, TMP 1990.046.0002, and TMP 2009.037.0068 all derive from a stratum immediately overlying the basalmost coal bed of the Lethbridge Coal Zone in the Dinosaur Park Formation (DPF), upper Campanian, Upper Cretaceous.
Etymology: The genus name is derived from “fluvius”, the Latin word for river, and “nectes”, the Latinized Greek word (nektes) for swimmer (gender; masculine). We are aware that the connecting vowel “o” is inappropriate, but this is a deliberate choice on our part as we prefer this spelling and pronunciation. This is not an inadvertent error and, therefore, does not require subsequent correction according to the International Code of Zoological Nomenclature (International Commission on Zoological Nomenclature, 1999: art. 32.5). The species name honours Donna Sloan who discovered the holotype, and for her long service to palaeontology, both in the field and as the scientific illustrator at the Royal Tyrrell Museum of Palaeontology (gender; feminine).
Diagnosis: Elasmosaurid possessing a boomerang-shaped clavicular arch with an acute anterior process, convex anterolateral margin, posterior margin with a deep embayment on either side, and a pronounced ventral keel, 22 dorsal vertebrae, and anterior dorsal centra with a ventral notch. Other manifest character states include: posterior cervical vertebra with high dorsoventral aspect; three pectoral vertebrae; five sacral vertebrae; scapula with an elongate dorsal ramus; coracoid with an open (non-enclosed) cordiform intercoracoid fenestra; pubis with an anterolateral embayment; and a postaxial supernumerary epipodial facet on the humerus. 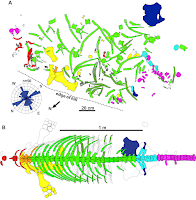