The Leptolalax applebyi group of Asian leaf-litter frogs currently comprises four species of particularly small-bodied (<40 mm SVL) species distributed in the Central Highlands of Vietnam and northeastern Cambodia. In addition to their small size, the group is characterized by their morphological and genetic similarities, as well as their breeding habitat at headwaters of small mountain streams and seeps. A recent study suggested that at least two-thirds of the diversity of the group remained hidden within morphologically cryptic lineages. We expand upon the molecular, morphometric, and acoustic data and formally delineate and describe five of these lineages as distinct species: Leptolalax ardens sp. nov., Leptolalax kalonensis sp. nov., Leptolalax pallidus sp. nov., Leptolalax maculosus sp. nov., and Leptolalax tadungensis sp. nov. Due to habitat loss, the current ranges of these species are likely to be a fraction of their historical extent and under continued threat from deforestation.

Species in the Leptolalax applebyi group are likely to have historically occurred over a large area of hilly northeastern Cambodia, central and southern Vietnam (~30,000 km2;Rowley et al. 2015). However, each species appears to occur over a relatively small area, with mountain ridges and valleys appearing to present barriers to dispersal (Rowley et al. 2015). This microendemism is perhaps not surprising given their small body size, specific habitat preferences and thus low dispersal ability. Frogs in the group breed in (and perhaps are more broadly restricted to) small seeps and rivulets, often at or near stream headwaters. This is in contrast to other, generally larger, species of Leptolalax most of which breed in larger streams. The specific habitat preferences of the group are likely to further restrict  adults  to  particular  drainage  basins  (as  suitable  breeding  habitat  is  not  present  on  mountain  ridges  or  valleys), and may limit the probability of larval dispersal along streams (except perhaps in high rainfall events).

Habitat loss is the greatest threat to amphibians in Southeast Asia, and the amphibians of the region appear to be particularly vulnerable to habitat alterations (Rowley et al. 2010d). Range-restricted species such as species in the L. applebyi group are likely to be most at risk (Rowley et al. 2010d), and frogs of the L. applebyi group appear to be restricted to relatively undisturbed broadleaf evergreen forest. A considerable portion of their historical range is likely to have already been lost due to deforestation (Rowley et al. 2005) and habitat loss and modification is a continued threat in the region (Meyfroidt & Lambin, 2008).

This study confirms significant species richness underestimation in the Leptolalax applebyi species group. The five additional species named herein almost triple the known species diversity in a group of frogs first identified in only 2009 (Rowley & Cao 2009). Further diversity in this group is likely to be revealed with additional surveys, particularly  in  drainage  basins  adjacent  to  known  species.  In  particular,  ‘Lineage  7’  of  the  L.  applebyi  group  (Rowley et al. 2015) is likely to be a new species, and additional material and/or call recordings are needed to confirm this. Due to rapid and ongoing deforestation, species in this group are at great risk of disappearing before they are even discovered (Rowley et al. 2015). Further survey work and additional systematic work to understand the true diversity of amphibians in the region is urgently required for effective conservation management. 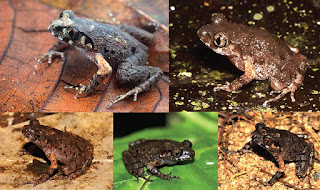