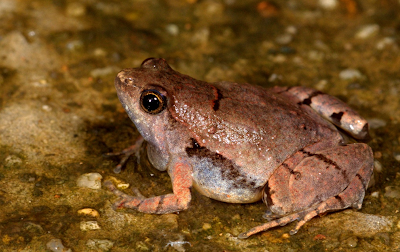 In recent times, several new species of amphibians have been described from India. Many of these discoveries are from biodiversity hotspots or from within protected areas. We undertook amphibian surveys in human dominated landscapes outside of protected areas in south western region of India between years 2013–2015. We encountered a new species of Microhyla which is described here as Microhyla laterite sp. nov. It was delimited using molecular, morphometric and bioacoustics comparisons. Microhyla laterite sp. nov. appears to be restricted to areas of the West coast of India dominated by laterite rock formations. The laterite rock formations date as far back as the Cretaceous-Tertiary boundary and are considered to be wastelands in-spite of their intriguing geological history. We identify knowledge gaps in our understanding of the genus Microhyla from the Indian subcontinent and suggest ways to bridge them.

Diagnosis: The new species is assigned to the genus Microhyla owing to the following set of characters sensu Parker (25), Dutta and Ray (26) and Matsui, Hamidy [27]: Small sized adults with circular pupil; dorsal skin smooth, with markings from back of eye to vent; supratympanic fold present; paratoid glands absent; fingers without webbing, free with or without dilations; tongue oval, entire and free at the base; snout less than twice the diameter of eye; tympanum hidden by skin; palmar tubercles distinct; distinct oval shaped inner metatarsal tubercle and rounded outer metatarsal tubercle; rudimentary webbing in foot.

Etymology: This species is named after the laterite rock formations in the type locality and other parts of its geographic range (Fig 4A). The specific name is an invariable noun in the nominative singular in apposition to generic name.

Ecology and Natural History Observations
Microhyla laterite sp. nov. was observed in and around the type locality during the south west monsoon seasons between April–August from 2013–2015. The species was found to be restricted to laterite habitats near rural and peri-urban areas. This species inhabits ephemeral ponds and other marshy areas in laterite habitats. They also occur in wet paddy fields where they were observed to vocalize from the embankment. Vocalization begins about 18:00 h and peaks between 19:15–21:30 h. The vocalization is very similar to that of ground crickets. Males can be located on leaf litter and other debris in dense grass clusters and often change their position while vocalizing. Upon disturbance, a few males were observed to stop calling and retreat backwards into small cavities in laterite rock formations where they lay low and hide for a few minutes. 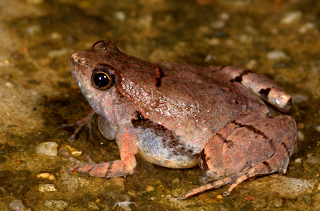