Background
The Indian Tectonic Plate split from Gondwanaland approximately 120 MYA and set the Indian subcontinent on a ~ 100 million year collision course with Eurasia. Many phylogenetic studies have demonstrated the Indian subcontinent brought with it an array of endemic faunas that evolved in situ during its journey, suggesting this isolated subcontinent served as a source of biodiversity subsequent to its collision with Eurasia. However, recent molecular studies suggest that Eurasia may have served as the faunal source for some of India’s biodiversity, colonizing the subcontinent through land bridges between India and Eurasia during the early to middle Eocene (~35–40 MYA). In this study we investigate whether the Draconinae subfamily of the lizard family Agamidae is of Eurasian or Indian origin, using a multi locus Sanger dataset and a novel dataset of 4536 ultraconserved nuclear element loci.

Results
Results from our phylogenetic and biogeographic analyses revealed support for two independent colonizations of India from Eurasian ancestors during the early to late Eocene prior to the subcontinent’s hard collision with Eurasia.

Conclusion
These results are consistent with other faunal groups and new geologic models that suggest ephemeral Eocene land bridges may have allowed for dispersal and exchange of floras and faunas between India and Eurasia during the Eocene.

Conclusions
The use of additional taxa, sequence-capture data, and newer geological models—all data not available to previous studies on Draconinae—resulted in novel and well-resolved relationships, leading to new biogeographic insights in this unique subfamily of lizards. Using these biogeographic insights and a broad comparison with previous biogeographic literature, we propose the Eocene Exchange Hypothesis, and the simple but well supported assumption that land bridges may have facilitated a broad-scale pattern of faunal exchange between the ISC and areas of Eurasia before its collision with Asia during the Eocene. We expect that with additional sampling of Indian and mainland Asian species, some factors that may have biased our biogeographic interpretations within the Draconinae to (i.e., Indian extinction events), can be evaluated. In addition, sampling of additional draconine species will allow us to test more fine-scaled hypotheses concerning dispersal and diversification within this group. Our phylogenomic analysis add to a growing body of knowledge addressing the effects of the ISC’s collision on biogeography and offers new ideas to be tested by future studies. 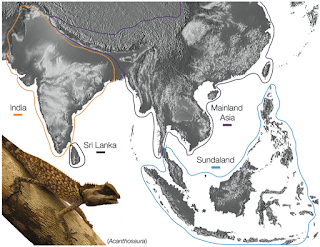