Lizards restricted to rocky habitats often comprise numerous deeply divergent lineages, reflecting the disjunct nature of their preferred habitat and the capacity of rocky habitats to function as evolutionary refugia. Here we review the systematics and diversity of the predominantly saxicoline Australian marbled velvet geckos (genus Oedura) in the Australian arid and semi-arid zones using newly-gathered morphological data and previously published genetic data. Earlier work showed that four largely allopatric and genetically divergent lineages are present: Western (Pilbara and Gascoyne regions), Gulf (west and south of the Gulf of Carpentaria), Central (central ranges) and Eastern (Cooper and Darling Basins). None of these four populations are conspecific with true O. marmorata, a seperate species complex that is restricted to the Top End region of the Northern Territory. Top End forms share a short, bulbous tail whereas the other four lineages treated here possess a long, tapering tail. Morphological differences among the arid and semi-arid lineages include smaller body size, tapering lamellae and a shorter tail for the Gulf population, and a partially divided rostral scale in the Western population compared to the Central and Eastern populations. Accordingly, we resurrect O. cincta de Vis from synonymy for the Central and Eastern lineages, and regard this species as being comprised of two evolutionary significant units. We also describe the Gulf and Western lineages as new species: Oedura bella sp. nov. and O. fimbria sp. nov., respectively. We note that a predominantly arboreal lineage (the Eastern lineage of O. cincta) is more widely distributed than the other lineages and is phylogenetically nested within a saxicoline clade, but tends to have a deeper head and shorter limbs, consistent with morphological variation observed in other lizard radiations including both saxicoline and arboreal taxa. 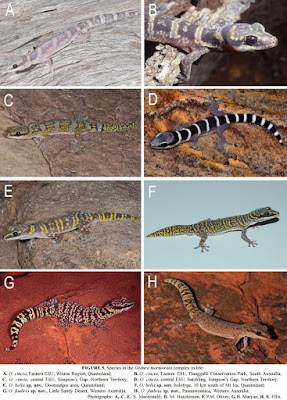 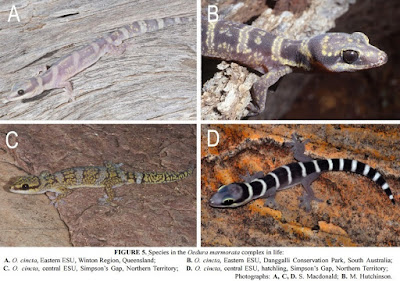 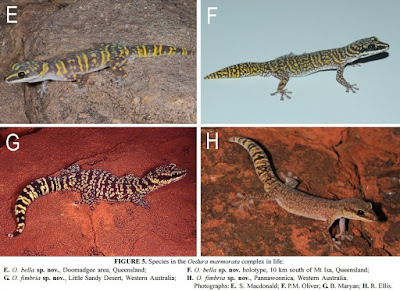 Distribution and habitat. Restricted to the ranges around the south and western edges of the Gulf of Carpentaria; from the Selwyn Range around Mt Isa in the southeast, north to Riversleigh and Musselbrook regions in the Queensland-Northern Territory border, as far west as the McArthur River and Borroloola regions of Northern Territory, with a further apparently isolated insular population on Groote Eylandt to the north (see comments), and another isolated record from the northern edge of the Barkly Tablelands (Fig. 2). Field observations suggest this species is primarily saxicoline, using both horizontal screes and vertical faces (including road cuttings), however, it has also been recorded under bark around the base of trees (but in rocky country) (G. Bourke, pers. comm.).

Etymology. From the Latin masculine adjective bellum (used in its feminine form), meaning amongst other things pretty, handsome, charming, fine, lovely, neat, pleasant, agreeable, active, gallant or good. In reference to the very attractive contrasting yellow and dark colour pattern of this species.

Distribution and habitat. Occurs in the Pilbara, Gascoyne and Murchison regions of mid-western Western Australia (Fig. 2). In the north (Pilbara), this species extends to the southern edge of the Great Sandy Desert, east to Karlamilyi National Park, and west to the Burrup Peninsula. In the south it occurs in the Gascoyne, western Murchison and Yalgoo regions, east as far as the Barlee Range, south to Mt Magnet and Gullwa, and east to the Little Sandy Desert. From collector’s notes associated with voucher specimens, this species was recorded as occurring on relatively massive ranges, rocky outcrops and breakaways, caves and gorges 114 times, whereas there are only 4 occurrences on trees and one under tin. We have only observed this species on rocky outcrops with large boulders (Pilbara) or on cliff faces (Kennedy Range).

Etymology. Fimbria is Latin for fringe in reference to the lateral fringes of expanded lamellae along the sides of the digits. Used as a noun in apposition.