Abstract
Fishes have adapted a number of different behaviors to move out of the water, but none have been described as being able to walk on land with a tetrapod-like gait. Here we show that the blind cavefish Cryptotora thamicola walks and climbs waterfalls with a salamander-like diagonal-couplets lateral sequence gait and has evolved a robust pelvic girdle that shares morphological features associated with terrestrial vertebrates. In all other fishes, the pelvic bones are suspended in a muscular sling or loosely attached to the pectoral girdle anteriorly. In contrast, the pelvic girdle of Cryptotora is a large, broad puboischiadic plate that is joined to the iliac process of a hypertrophied sacral rib; fusion of these bones in tetrapods creates an acetabulum. The vertebral column in the sacral area has large anterior and posterior zygapophyses, transverse processes, and broad neural spines, all of which are associated with terrestrial organisms. The diagonal-couplet lateral sequence gait was accomplished by rotation of the pectoral and pelvic girdles creating a standing wave of the axial body. These findings are significant because they represent the first example of behavioural and morphological adaptation in an extant fish that converges on the tetrapodal walking behaviour and morphology. 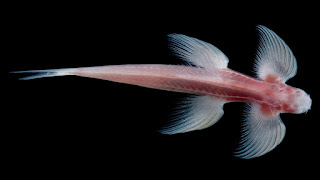