[Herpetology • 2016] Systematics and Phylogeny of Sitana (Reptilia: Agamidae) of Peninsular India, with the Description of One New Genus, Sarada, and Five New Species 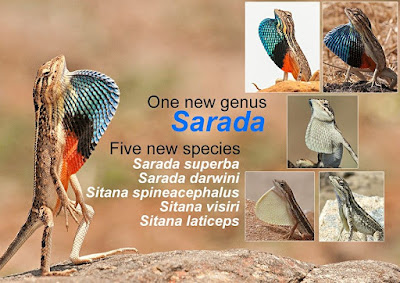 We revise the taxonomy of the agamid genus Sitana Cuvier, 1829, a widely distributed terrestrial lizard from the Indian subcontinent based on detailed comparative analyses of external morphology, osteology and molecular data. We sampled 81 locations spread over 160,000 sq.km. in Peninsular India including type localities, which represented two known and five previously undescribed species. Based on general similarity in body shape and dewlap all species were hitherto identified as members of the genus Sitana. However, Sitana deccanensis and two other morphotypes, which are endemic to north Karnataka and Maharashtra in Peninsular India, are very distinct from the rest of the known members of the genus Sitana based on their external morphology and osteology. Moreover, members of this distinct morphological group were monophyletic in the molecular tree, and this clade (clade 1) was sister to two well-supported clades (2 and 3) constituting the rest of the Sitana. The interclade genetic divergence in mtDNA between clade 1 and clades 2 and 3 was 21-23%, whereas clade 2 and clade 3 exhibited 14-16% genetic divergence. Thus, we designate a new genus name “Sarada” gen. nov. for species represented in Clade 1, which also includes the recently resurrected Sitana deccanensis. We describe two new species in Sarada gen. nov. and three new species in Sitana. Similarity in the dewlap of Sitana and Sarada gen. nov. is attributed to similar function (sexual signaling) and similarity in body shape is attributed to a similar terrestrial life style and/or common ancestry.

Etymology. Cuvier (1829) in his description did not mention anything about the generic name. Jerdon (1853) mentioned that Sitana is the name that it was known by at Puducherry, with the genus name a Latin termination of the word “Shaitan” or Devil. Jerdon also notes that the name was sometimes applied to it by the Musulmans of South India. More recently Schleich and Kästle (2002), without any reference, suggested that the generic name is derived from the Tamil language sit wona, small lizard. Sit wona does not translate to small lizard in Tamil: it is either siriyawona or chinnawona. There is no mention about the etymology of the genus by past herpetologists (Günther, 1864, Boulenger, 1890, Smith, 1935). Since Jerdon’s information was published during the same century, we suggest his version of the genus etymology is more likely to be accurate.

Diagnosis. Small to medium-sized lizards, male SVL 36.6-56.6 mm, females 36.4-52.1 mm; head-scales unequal, strongly keeled; supraciliary edge sharp; fourth toe extending well beyond third, fifth toe absent; exposed tympanum, no preanal or femoral pores, no prominent dorsal crest; presence of enlarged scales on the lateral side of the trunk and a single enlarged keeled scale on the thigh region. Scales on the dorsum within the dark brown line marking are relatively larger than the adjoining smaller scales on the lateral side of the body. Dewlap size varies from small to large depending on the species. Sitana can be differentiated from their closest living genus Otocryptis by the absence of fifth toe and an exposed tympanum.

Distribution and habit. Widely distributed in the Indian Subcontinent from Jammu and Kashmir in the north, the Sind region of Pakistan in the west, West Bengal in the east, and Sri Lanka in the south. (Stoliczka, 1872; Murray, 1886; Sahi and Duda, 1981). Sitana are primarily terrestrial, but also climb onto low bushes, herbs and small rocks (Fig. 9). Breeding starts approximately a month and a half before the monsoon (Rao and Rajabai, 1972; Subramanean and Reddy, 2010; Pal et al., 2010; Trivedi et al., 2011). 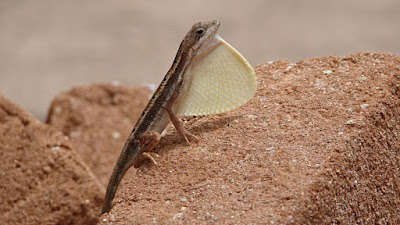 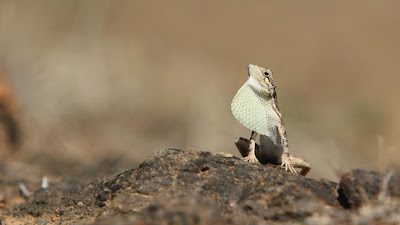 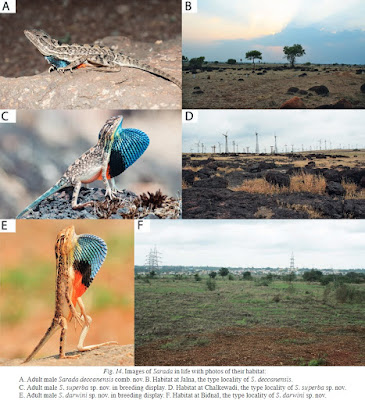 Type species. Sitana deccanensis Jerdon, 1870.
Content. Sarada deccanensis (Jerdon, 1870) comb. nov., Sarada darwini sp. nov., Sarada superba sp. nov.
Etymology. The generic epithet is derived from the word ‘Sarada,’ which is the Marathi word for agamid lizards in Maharashtra and some parts of Karnataka, where this genus is endemic.

Diagnosis. Sarada gen. nov. can be easily diagnosed from all other agamid lizards from the Indian subcontinent except Sitana in having five fingers and four toes. Sarada gen. nov. is closely related to two genera from Indian subcontinent, Otocryptis Wagler 1830 and Sitana Cuvier (1829). Sarada gen. nov. can be easily differentiated from Otocryptis by the absence of fifth toe and exposed tympanum. Sarada gen. nov. can be diagnosed from Sitana by following unique combination of characters: breeding males with iridescent blue, orange and black colour with yellow stripes, the orange colour in some individuals extending all the way to the vent; absence of enlarged scale on the thigh; scales on flanks homogeneous, absence of enlarged scales on the lateral side of the body, absence of enlarged, strongly keeled scales around the tympanum; additionally Sarada gen. nov. can be distinguished from the Sitana sivalensis complex by the following set of characters: large body size (range 52.9-74.4 mm SVL males; range 43.6-64.3 mm SVL females); very large dewlap with enlarged overlapping scales extending all the way to middle of the abdomen (mean 51% up to 73% of TRL). Osteologically, Sarada gen. nov. can be distinguished from Sitana ponticeriana and Sitana spinaecephalus clades by the additional phalange on the fourth finger and in having one less trunk vertebra (Fig. 7 and Table 6). Dorsum pale brown to dark brown with four black brown-edged rhomboidal markings, the one on the nuchal region is darker than the remainder, and the back is bordered on each side with a thin cream coloured band. One prominent buff coloured line begins below the eye extending to the forearam, and another is comparatively broad and extends from behind the eye to the neck; a prominent dark brown interorbital patch is present but does not reach the eyes. Limbs and tail with dark brown or black bands of variable widths.

Distribution. Restricted distribution in Maharshtra and north Karnataka, the northern most records are from Nashik in Maharashtra, and the southernmost are in Bellary and Bidnal in north Karnataka. The easternmost records are from Chanda (Chandrapur) (Blanford, 1870; Amarasinghe et al., 2015). Based on the available records, it appears that they are not found in the lowlands and coastal plateaus on the western part of the distribution of the genus. 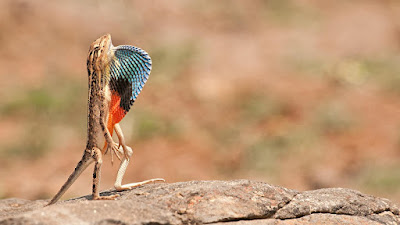