Significance
Tyrannosaurs — the iconic group of dinosaurian carnivores that includes Tyrannosaurus rex —dominated latest Cretaceous ecosystems with their colossal sizes and sophisticated senses. A gap in the mid-Cretaceous fossil record between these giant apex predators and their older, smaller relatives makes it difficult to understand how the characteristic body size and ecological habits of T. rex and kin developed. A new species from Uzbekistan fills this gap. This horse-sized animal shows that tyrannosaurs had yet to achieve huge size at this time but had already evolved key brain and sensory features of the gigantic latest Cretaceous species. Tyrannosaurs apparently developed giant body size rapidly, late in the Cretaceous, and their success may have been enabled by their early-evolving keen senses.

Abstract
Tyrannosaurids — the familiar group of carnivorous dinosaurs including Tyrannosaurus and Albertosaurus — were the apex predators in continental ecosystems in Asia and North America during the latest Cretaceous (ca. 80–66 million years ago). Their colossal sizes and keen senses are considered key to their evolutionary and ecological success, but little is known about how these features developed as tyrannosaurids evolved from smaller basal tyrannosauroids that first appeared in the fossil record in the Middle Jurassic (ca. 170 million years ago). This is largely because of a frustrating 20+ million-year gap in the mid-Cretaceous fossil record, when tyrannosauroids transitioned from small-bodied hunters to gigantic apex predators but from which no diagnostic specimens are known. We describe the first distinct tyrannosauroid species from this gap, based on a highly derived braincase and a variety of other skeletal elements from the Turonian (ca. 90–92 million years ago) of Uzbekistan. This taxon is phylogenetically intermediate between the oldest basal tyrannosauroids and the latest Cretaceous forms. It had yet to develop the giant size and extensive cranial pneumaticity of T. rex and kin but does possess the highly derived brain and inner ear characteristic of the latest Cretaceous species. Tyrannosauroids apparently developed huge size rapidly during the latest Cretaceous, and their success in the top predator role may have been enabled by their brain and keen senses that first evolved at smaller body size.

Holotype: ZIN PH (Paleoherpetological Collection, Zoological Institute, Russian Academy of Sciences, Saint Petersburg, Russia) 1146/16, a well-preserved braincase missing only the paroccipital processes and much of the parabasisphenoid (Figs. 1 and 2 and Figs. S1−S3).

Conclusions
Timurlengia is a long-awaited diagnostic tyrannosauroid from the middle part of the Cretaceous. It indicates that these predators were still far from giants during this time, but had already evolved signature brain and sensory features that may have been tied to the extraordinary success of the last-surviving, latest Cretaceous species like Tyrannosaurus. However, Timurlengia remains a single data point from a still murky interval in dinosaur history, and future discoveries from this gap will undoubtedly lead to a better understanding of how tyrannosauroids rose from marginal creatures into some of the largest terrestrial predators in Earth history. 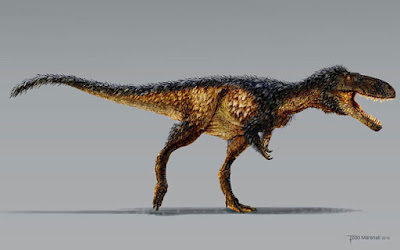 Stephen L. Brusatte, Alexander Averianov, Hans-Dieter Sues, Amy Muir and Ian B. Butler. 2016. New Tyrannosaur from the mid-Cretaceous of Uzbekistan clarifies Evolution of Giant Body Sizes and Advanced Senses in Tyrant Dinosaurs. Proceedings of the National Academy of Sciences of the United States of America. in press. DOI:   10.1073/pnas.1600140113