Abstract
Located over 3800 km from the nearest continent, the Hawaiian Islands have previously been thought to support only one endemic land mammal, the extant Hawaiian hoary bat (Lasiurus cinereus semotus), a taxon that apparently initially dispersed from mainland North America between 10,000 and 7000 years ago. Some uncertainty exists regarding the status of this taxon (i.e., whether or not populations representing more recent invasions of L. cinereus from North America are exchanging genes with the older lineage, and whether or not semotus represents a distinct species), but all researchers agree that hoary bats are the only endemic land mammals extant in the islands today. However, fossil evidence indicates that the Hawaiian Islands once supported another quite different endemic bat species that is now extinct. Skeletal remains of a new genus and species of vespertilionid bat are herein described from various Late Pleistocene and Holocene/Recent deposits on the five largest Hawaiian Islands. The new taxon is diagnosed by a mosaic of features including dental formula, molar morphology, skull shape, and metacarpal formula. This new taxon, which is smaller than Hawaiian hoary bat, was apparently present in the Hawaiian Islands by 320,000 years b.p. and survived until at least 1100 years ago and possibly much later. Accordingly, two species of bats coexisted on the Hawaiian Islands for several thousand years. As with numerous extinct endemic bird species, the extinction of the new bat taxon described here may have resulted either directly or indirectly from human colonization of the islands and the invasive nonnative species that came with human explorers and settlers. 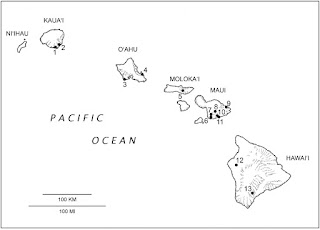 Geographic and Geologic Range: Hawaiian Islands, at least the five largest islands, from ca. Middle Pleistocene to Late Holocene (but apparently not into post-1778 historic period), with details as follows. Kaua‘i: infill of sinkhole of Late Pleistocene lithified calcareous dune deposits, and in Early Holocene eolian surface calcareous sand-dune deposits; O‘ahu: in Middle Pleistocene pond deposits of volcanic tuff-cone crater, as well as in later-Pleistoceneto-Holocene composite soil deposits (primarily sedimentary) within limestone sinkholes in emergent Late Pleistocene coral-algal reefs; Moloka‘i: in presumably Polynesian or early postcontact alluvial sediment on floor of a dynamically active piping cave; Maui: on exposed floor, embedded in mineralized crusts on walls and in alluvial sediments of Late Pleistocene or Holocene lava tubes; Hawai‘i: on exposed floor or in alluvial deposits of Late Pleistocene and Holocene lava tubes; approximate locations of these sites are shown in figure 1, and detailed information on all sites is provided in appendix 4. 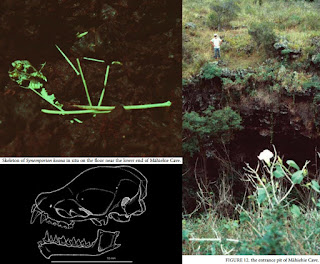 Etymology: The genus name Synemporion root from Greek common noun synemporos, “fellow traveler or companion,” with addition of the suffix -ion to form a neuter diminutive, in allusion to the new bat’s former co-occupation of the tectonically mobile Hawaiian Islands with the larger Lasiurus cinereus semotus. The specific name is a noun in apposition, formed from Hawaiian: the demonstrative ke, plus ana, “cave” or “lava tube,” referring to the subterranean provenience of the holotype and a majority of the paratypes. 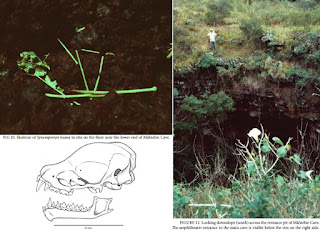