ABSTRACT
A new genus and species of brachyuran crab, Samarplax principe (family Hymenosomatidae) is described from an anchialine cave in Samar Island, Philippines. This cavernicolous species lacks rostrum and has degenerated eyes, possesses two small spines at the lateral margin of the carapace, has a proportionally shorter projected merus of the third maxilliped, an almost flat epistome and brush-like setae instead of teeth along the cutting edges of the chelae. The complete loss of visual organs and pigmentation, the long but slender ambulatory legs and large egg size suggest a completely hypogeal lifestyle for this species. This is the first species of Hymenosomatidae recorded from an anchialine cave in the Philippines exhibiting true troglomorphic adaptations. 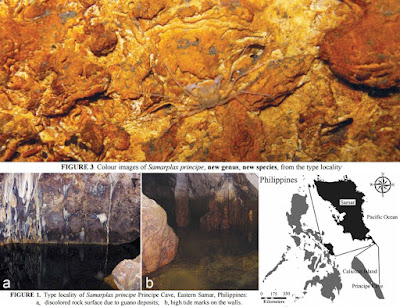 Etymology. The genus name Samarplax is derived from the locality, Samar province and plax for “plate”, the suffix of the cavernicolous genera, Sulaplax and Guaplax, alluding to their superficial resemblance. Gender feminine.

Etymology. This species, principe, was named after the cave locality, Principe Cave. The name is used as a noun in apposition.

Habitat. Samarplax principe new species, was discovered in Principe Cave, an anchialine cave, located approximately 200 meters away from the shoreline, with the surface salinity ranging from 1.5 to 3.5‰.