A new species of Pristimantis is described from an Andean cloud forest at 2650 m in the Cordillera Oriental of Colombia. Pristimantis dorado sp. nov. is similar to and could be closely related to P. acutirostris, but can be readily distinguished from this latter species by the absence of a tympanic annulus, vocal slits, vocal sac and reticulations on concealed surfaces, and by having a metallic gold iris with a brown horizontal streak. The phylogenetic position of the new species is recovered and we provide its advertisement call, which this species manages to emit despite lacking a vocal sac and vocal slits. This discovery reminds us that despite the extensive research on the alpha-taxonomy of Pristimantis in Colombia, fieldwork in high montane forests continues to yield previously unknown species. 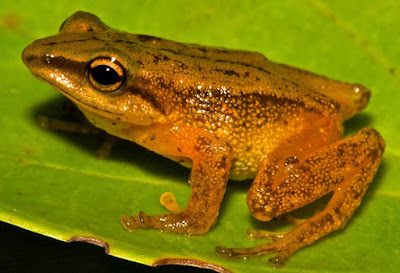 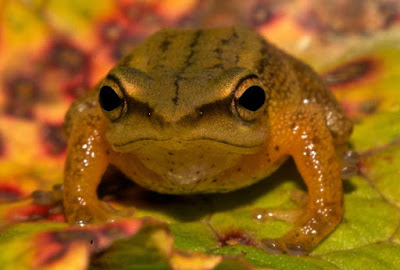 Distribution and natural history. The new species is known only from the type locality, the buffer zone of Chingaza National Park and Farallones de Gachalá, Municipio de Medina, Departamento de Cundinamarca, Colombia (fig. 4). Specimens were found in an Andean cloud forest between 19:00 h and 22:30 h during a light drizzle. Pristimantis dorado was found along the roadside in association with plants such as Miconia summa, Weinmannia spp. and Hedyosmum bomplandianum and near palms of the species Ceroxylon quindiuense. Pristimantis dorado is vocally active at night; all adult males captured were calling from vegetation at a height of 50 to 150 cm. We observed two or more males vocalizing from the same plant at different heights above the ground. By placing males together to be photographed, we observed that the frogs produced a typical advertisement call but increased the call rate and decreased the intercall interval, which may represent an agonistic behaviour. However, no orientation behaviour or physical contact was observed. Pristimantis dorado was found in sympatry with P. frater.

Etymology The specific name is an adjective in Spanish meaning “golden”, in allusion to the gold colour of the dorsum in this species. This name is also a tribute to “El Dorado”, a legendary but mythical city of gold sought by Spaniard conquistadores throughout South America. 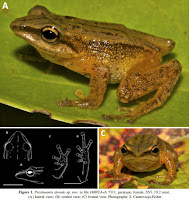