Abstract
We identified a new holomycotrophic orchid that is related to the myco-heterotrophic Calypsoeae. Because chloroplast genes are primarily lacking or are highly divergent, key morphological characters are either reduced or lost from many myco-heterotrophs, and the phylogenetic relationships of weakly supported paraphyletic Calypsoeae within Epidendroideae have been poorly understood in previous molecular systematic studies. Using chloroplast rbcL, psaB, and matK and nuclear Xdh and ITS sequences, we determined the circumscription and systematic positions of the new orchid and the tribe. The results indicate that the epidendroid taxa include most of the clades that are successively sister to the grade of clades representing previously recognized tribes. Calypsoeae comprising four well-supported clades with 12 genera (except for the previous temporarily placed Wullschlaegelia) is supported as a monophyletic and sister clade to Epidendreae (excluding Coeliinae). The new orchid is nested in Calypsoeae and is a sister to Dactylostalix and/or Calypso. This new holomycotrophic orchid presents a subumbel inflorescence that grows underground, and flower with a long pedicel reputing the ground to open and two fragments at the base of the hook, which are obviously morphologically different from those of Calypsoeae. To accommodate this species in the current generic circumscription, a new genus Yunorchis was created.

Etymology: The generic name alludes to the type locality, Yunnan, and incorporates the Greek name for orchid; Yunorchis refers to an orchid genus in Yunnan province, China. The specific epithet pingbianensis refers to the type of species of Yunorchis that grows in Pingbian county of Yunnan.

Diagnosis: This new remarkable genus is distinct from all known orchid genera; it comprises an entire plant with a subumbel inflorescence growing underground, flowers that each have a long pedicel that ruptures the ground to open and that has a sac-shaped labellum, a sac mouth that is connate on the front half edges, forming a hook and two fragments at the base of the hook, and four waxy pollinia in two pairs, each containing two pollinia that are unequal in size, and there are no conspicuous caudicles that are attached directly to a common viscidium.

Conclusions:
The new orchid entity is restricted to Pingbian County in southern Yunnan, China, and is characterized by plants that have subumbel inflorescences growing underground. The flowers of these plants have a long pedicel rupturing the ground, a sac-shaped labellum, and a sac mouth that is connate on the front half of the edges, forming a hook that has two fragments at the base. These features distinguish the new orchid from all of the other known orchids. 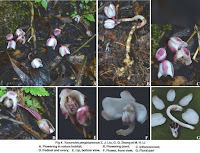