[Ichthyology • 2016] Annotated Checklist of the Living Sharks, Batoids and Chimaeras (Chondrichthyes) of the World, with A Focus on Biogeographical Diversity

An annotated checklist of the chondrichthyan fishes (sharks, batoids and chimaeras) of the world is presented. As of 7 November 2015, the number of species totals 1188, comprising 16 orders, 61 families and 199 genera. The checklist includes nine orders, 34 families, 105 genera and 509 species of sharks; six orders, 24 families, 88 genera and 630 species of batoids (skates and rays); one order, three families, six genera and 49 species of holocephalans (chimaeras). The most speciose shark orders are the Carcharhiniformes with 284 species, followed by the Squaliformes with 119. The most species-rich batoid orders are the Rajiformes with 285 species and the Myliobatiformes with 210. This checklist represents the first global checklist of chondrichthyans to include information on maximum size, geographic and depth distributions, as well as comments on taxonomically problematic species and recent and regularly overlooked synonymizations. Furthermore, a detailed analysis of the biogeographical diversity of the species across 10 major areas of occurrence is given, including updated figures for previously published hotspots of chondrichthyan biodiversity, providing the detailed numbers of chondrichthyan species per major area, and revealing centres of distribution for several taxa 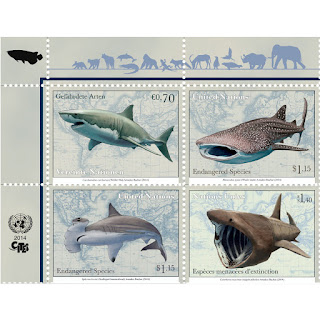 S. Weigmann. 2016. Annotated Checklist of the Living Sharks, Batoids and Chimaeras (Chondrichthyes) of the World, with A Focus on Biogeographical Diversity
Journal of Fish Biology. DOI: 10.1111/jfb.12874