Xiaoxueshan Mountain lies in the Northeast of Shangri-la, NW Yunnan, China. In 1995, one of our co-authors Mr. Jens Neilsen visited Xiaoxueshan Mountain and noticed an unknown Rhododendron species growing on steep cliff close to the main road. This species is similar to R. trichostomum Franchet (1895: 396), but differs in leaf, inflorescence and fruit characters (Fig. 1). However, no detailed observation was carried out and no specimens were collected at that time. In June 2013, a field investigation was conducted, aiming to examine and fully describe this new species during its flowering period, and its status as a distinct new species was confirmed. 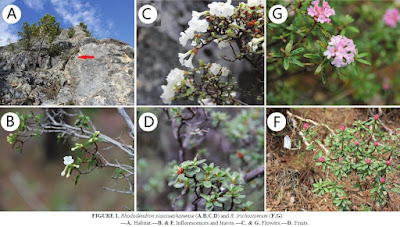 
Etymology:— The specific epithet refers to the site (Xiaoxueshan Mountain) where the new species was discovered and collected. 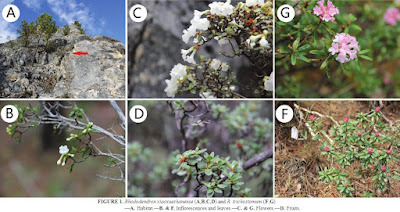