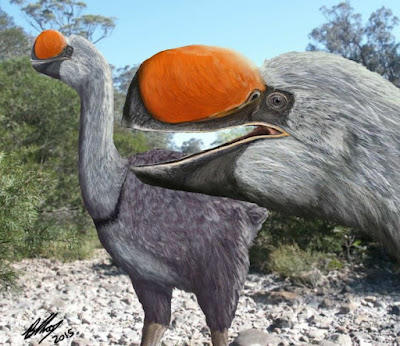 ABSTRACT
Giant flightless fowl (Aves, Dromornithidae) similar to the Northern Hemisphere gastornithids and weighing up to 350–650 kg evolved on Gondwana and existed in what is now Australia from the Eocene to the late Quaternary. Understanding cranial morphology of dromornithids has until now been based almost wholly on species of Dromornis, with that of species in three other genera either previously unknown or very fragmentary. Here we rectify this deficiency and describe a well-preserved cranium from the middle Miocene Bullock Creek Local Fauna referred to Ilbandornis woodburnei, rich, fragmentary crania, quadrates, pterygoids, and mandibles for the Oligo-Miocene Barawertornis tedfordi Rich, and additional material of the species of Ilbandornis. The morphological similarity of this cranial material suggests that the emu-sized B. tedfordi is a smaller precursor to and differs little from species of Ilbandornis. Dromornis murrayi, n. sp., from late Oligocene–Early Miocene sites at Riversleigh, based on cranial and postcranial elements, is the oldest and smallest species in its genus. Placed in the context of other data, these observations suggest that the dromornithids comprised only two lineages throughout the Oligo-Miocene. The Barawertornis-Ilbandornis lineage attained maximum diversity in the middle Miocene Bullock Creek and late Miocene Alcoota local faunas (LF), with two species in each, but the Dromornis lineage seems to have been monotypic throughout its temporal range. The low diversity of these giant galloanseres in Australia mirrors that of the giant herbivorous ratites (ostriches and kin), which similarly have low diversity where they coevolved with diverse mammalian faunas.