Highlights
• Currently, three species of rheophilic barbels are recognized from the Danube basin.
• New samples from the Hungarian plain were sequenced for mtDNA and nuclear markers.
• Barbels from Sebes-Körös River form a new clade and differ morphologically.
• The newly discovered lineage is described here as Barbus biharicus sp. nov.

Abstract
Three species of small-sized rheophilic Barbus fishes are endemic to and widely distributed throughout the mountain regions in the Danube River basin. In Hungary, barbels referred to as B. petenyi occur in streams in the foothills of the Carpathians near the borders with Slovakia, Ukraine and Romania. However, up to now, no genetic investigations were carried out on rheophilic barbels in this region. This study aims to clarify the taxonomic identity and distribution of the rheophilic barbels in the Hungarian plain based on molecular and morphological analyses. Two mitochondrial genes (cytochrome b, ATPase 6/8) and one nuclear gene (beta-actin intron 2) were sequenced and several morphometric and meristic characters were recorded. Phylogenetic and morphological analyses revealed that there are four genetically distinct lineages among the rheophilic barbels in the Carpathian Basin. The results demonstrated that North-Hungarian Barbus populations belong to B. carpathicus and that B. petenyi presumably does not occur in Hungary. As expected, B. balcanicus was only recorded in samples from the Balkans analyzed for reference. A distinct species, new to science, was discovered to be present in Sebes-Körös River (Crişul Repede) in eastern Hungary and western Romania and is formally described here as Barbus biharicus Antal, László, Kotlík – sp. nov. 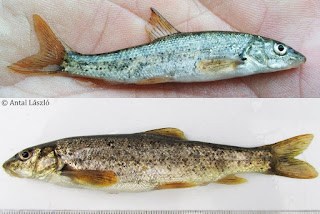