Recent research has led to enormous progress in the understanding of chameleon phylogeny, and new genus names were introduced for most of the identified deep chameleon clades (Kinyongia, Nadzikambia, Rieppeleon), or available names were resurrected from synonymy (Archaius) or elevated from subgenus level (Trioceros). A remarkable exception is a deep lineage composed of the two morphologically distinct species Brookesia ­nasus and B. lolontany from Madagascar. Raxworthy et al. (2002) found this lineage to be the basal clade in the family Chamaeleonidae, but more recent studies regarded it (with limited support) as a sister group of all other Brookesia that split off in the Cretaceous or Palaeocene. Thus, the Brookesia ­nasus-lolontany clade split off much earlier than all other extant chameleon clades recognized today as distinct genera. In the present paper, we provide new data on B.­ lolontany (including an embedded 3D-PDF model of its skeleton) and a morphologi-cal diagnosis of the B.­ nasus-lolontany clade, and transfer the two species to a new genus. As already emphasized by Vences et al. (2013), this decision results in two clearly monophyletic genera with improved morphological diagnosability.

Etymology. The new genus name Palleon is derived from the Greek word “Palae-” (meaning “old”) and the Greek word “leon” (meaning “lion”; as used for other chameleon genera), referring to the very early separation of this clade. The resulting composite Palae-o-leon is shortened to Palleon for simplified pronunciation. The gender of the genus is masculine. 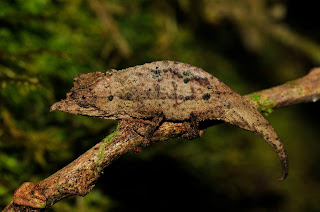 IUCN - A new genus name for an ancient Malagasy chameleon clade and a PDF-embedded 3D model of its skeleton http://www.iucn.org/about/work/programmes/species/who_we_are/ssc_specialist_groups_and_red_list_authorities_directory/amphibians_and_reptiles/chameleon/?16054%2FPalleon-Chameleon
http://markscherz.tumblr.com/post/70629343762/palleon-gen-nov-a-new-genus-of-chameleons-from