Abstract
Reports of killer whales (Orcinus orca) preying on large whales have been relatively rare, and the ecological significance of these attacks is controversial. Here we report on numerous observations of killer whales preying on neonate humpback whales (Megaptera novaeangliae) off Western Australia (WA) based on reports we compiled and our own observations. Attacking killer whales included at least 19 individuals from three stable social groupings in a highly connected local population; 22 separate attacks with known outcomes resulted in at least 14 (64%) kills of humpback calves. We satellite-tagged an adult female killer whale and followed her group on the water for 20.3 h over six separate days. During that time, they attacked eight humpback calves, and from the seven known outcomes, at least three calves (43%) were killed. Overall, our observations suggest that humpback calves are a predictable, plentiful, and readily taken prey source for killer whales and scavenging sharks off WA for at least 5 mo/yr. Humpback “escorts” vigorously assisted mothers in protecting their calves from attacking killer whales (and a white shark, Carcharodon carcharias). This expands the purported role of escorts in humpback whale social interactions, although it is not clear how this behavior is adaptive for the escorts. 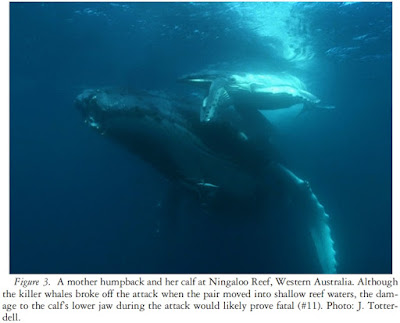