Recent studies suggested that many fossil marine turtles might not be closely related to extant marine turtles (Chelonioidea). The uncertainty surrounding the origin and phylogenetic position of fossil marine turtles impacts our understanding of turtle evolution and complicates our attempts to develop and justify fossil calibrations for molecular divergence dating. Here we present the description and phylogenetic analysis of a new fossil marine turtle from the Lower Cretaceous (upper Barremian-lower Aptian, >120 Ma) of Colombia that has a minimum age that is >25 million years older than the minimum age of the previously recognized oldest chelonioid. This new fossil taxon, Desmatochelys padillai sp. nov., is represented by a nearly complete skeleton, four additional skulls with articulated lower jaws, and two partial shells. The description of this new taxon provides an excellent opportunity to explore unresolved questions about the antiquity and content of Chelonioidea. We present an updated global character-taxon matrix that includes D. padillai and marine turtles known from relatively complete specimens. Our analysis supports D. padillai as sister taxon of D. lowi within Protostegidae, and places protostegids as the sister to Pan-Dermochelys within Chelonioidea. However, this hypothesis is complicated by discrepancies in the stratigraphic appearance of lineages as well as necessarily complicated biogeographic scenarios, so we consider the phylogeny of fossil marine turtles to be unresolved and do not recommend using D. padillai as a fossil calibration for Chelonioidea. We also explore the definition of “marine turtle,” as applied to fossil taxa, in light of many littoral or partially marine-adapted fossil and extant lineages. We conclude that whereas the term “oldest marine turtle” depends very much on the concept of the term being applied, we can confidently say that D. padillai is the oldest, definitive, fully marine turtle known to date. 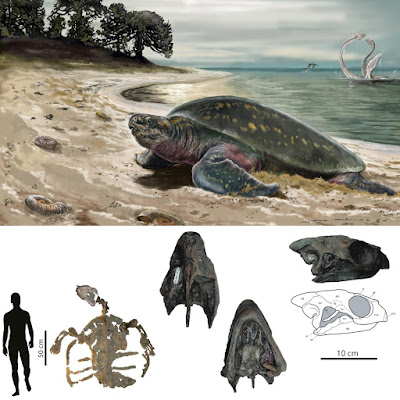 Scientists at the Senckenberg Research Institute in Frankfurt have described the world’s oldest fossil sea turtle known to date. The fossilized reptile is at least 120 million years old – which makes it about 25 million years older than the previously known oldest specimen. The almost completely preserved skeleton from the Cretaceous, with a length of nearly 2 meters, shows all of the characteristic traits of modern marine turtles. The study was published today in the scientific journal “PaleoBios.”

“Santanachelys gaffneyi is the oldest known sea turtle” – this sentence from the online encyclopedia Wikipedia is no longer up to date.  “We described a fossil sea turtle from Colombia that is about 25 million years older,” rejoices Dr. Edwin Cadena, a scholar of the Alexander von Humboldt foundation at the Senckenberg Research Institute. Cadena made the unusual discovery together with his colleague from the US, J. Parham of California State University, Fullerton.

“The turtle described by us as Desmatochelys padillai sp. originates from Cretaceous sediments and is at least 120 million years old,” says Cadena. Sea turtles descended from terrestrial and freshwater turtles that arose approximately 230 million years ago. During the Cretaceous period, they split into land and sea dwellers. Fossil evidence from this time period is very sparse, however, and the exact time of the split is difficult to verify. “This lends a special importance to every fossil discovery that can contribute to clarifying the phylogeny of the sea turtles,” explains the turtle expert from Columbia.

The fossilized turtle shells and bones come from two sites near the community of Villa de Leyva in Colombia. The fossilized remains of the ancient reptiles were discovered and collected by hobby paleontologist Mary Luz Parra and her brothers Juan and Freddy Parra in the year 2007. Since then, they have been stored in the collections of the “Centro de Investigaciones Paleontológicas” in Villa Leyva and the “University of California Museum of Paleontology.”

Cadena and his colleague examined the almost complete skeleton, four additional skulls and two partially preserved shells, and they placed the fossils in the turtle group Chelonioidea, based on various morphological characteristics. Turtles in this group dwell in tropical and subtropical oceans; among their representatives are the modern Hawksbill Turtle and the Green Sea Turtle of turtle soup fame.

“Based on the animals‘ morphology and the sediments they were found in, we are certain that we are indeed dealing with the oldest known fossil sea turtle,” adds Cadena in summary.