Abstract
The description of Oligodon sublineatus Duméril, Bibron & Duméril, 1854 was based on two syntypes located at Paris Natural History Museum (MNHN). The larger specimen (SVL 254 mm) was described in detail, but erroneously labelled as originating from the Philippines, the second specimen (SVL 150 mm) was labelled as originating from ‘Ceylan’ (=Sri Lanka). The smaller specimen, up to this point, has always been considered as the holotype by monotypy. Since recognising the larger specimen in the collection of MNHN as a syntype, we hereby designate it as the lectotype of Oligodon sublineatus and redescribe comprehensively both syntypes. Oligodon sublineatus (SVL 152–310 mm) has 130–161 ventral scales, 23–42 divided subcaudals, a divided anal plate, a loreal, seven supralabials, and 1+2 temporals. Furthermore, we provide a detailed account of the distribution and natural history of this widely distributed Sri Lankan endemic snake. 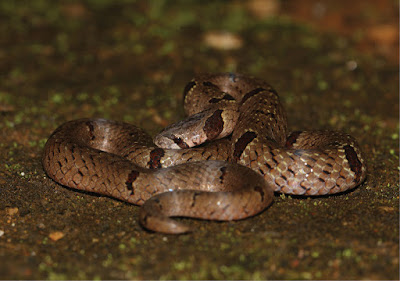 Natural history:
A nocturnal snake, sometimes active during day time. Temperature, humidity, and light intensities for daytime activity were respectively measured at 24.8–27.2 °C, 67–82%, and 38–365 lux, based on 50 observations in dense forested areas. It usually does not bite, but if this does occur then it will lead to soreness, pain and temporary bleeding in the victim. Biting has been occasionally observed during touching or handling attempts by the victim. When frightened, the snake either coils up and hides its head within its coiled up body; or it quickly tries to escape to a safe hiding place inside the leaf litter. When the snake coils, it enlarges its body and displays its vivid skin colours (white, pink and brown), which is visible between the scales around the mid body. We observed, on a number of occasions, the snake practicing thanatosis (death mimicry) for up to 10–15 minutes after carrying out our own handling attempts. Once the snake had noticed that threat had disappeared, it quickly escaped and hid itself in the leaf litter. We have observed this species living in sympatry with other snakes of several families such as Aspidura guentheri Ferguson, 1876 (Natricidae); Hypnale zara (Gray, 1849) (Viperidae); and Sibynophis subpunctatus (Duméril, Bibron & Duméril, 1854) (Colubridae).

Based on our observations, its diet consists mostly of lizards (saurophagy) and small snakes eggs (oophagy), small spiders, beetles, other insects and the larvae of other invertebrates. More specifically, we observed the snake feeding on ground dwelling skinks (Lankascincus sp.) and geckos (Hemidactylus frenatus and Cnemaspis sp.). If the prey is large, the snake wraps itself around it and squeezes it until it suffocates. In captivity, it was fed with jumping spiders, small wild cockroaches, annelid worms, meal-worms, small frogs, and the freshly detached tail tips of geckos.

During the breeding season (May–June) 3–5 individuals can be observed close by and we observed several copulations in the evenings just after dark (18.0–19.0 hrs). The species lays 3–5 eggs at a time on dry, cool, loose soil or under decaying logs on the ground (soil temperature 26.2–27.9 °C; humidity 58–73%; light intensity 0–27 lux, based on observations of 10 ovipositions). Eggs are cream in colour and oval in shape (12–14 mm long and 4–5 mm wide, n = 40). The lectotype MNHN 3238 is a gravid female with three eggs in its genital tract. The incubation period is 38–45 days (based on observations of 10 incubating clutches). We did not see the parents close by during the incubation nor shortly afterwards, indicating the lack of parental care of the eggs or hatchlings. The new born juveniles were 4–5 cm in total length and their body colour varied from dark brown to black. We noticed that ants were their main egg predators on about ten occasions. We also observed on several occasions, this snake attempting to avoid ant-nests when moving or resting.

We have found this species inside termite mounds on many occasions, an observation also made by Smith (1943). This may indicate either a strategy used by the snake to avoid ants (because we never observed ant nests in or around termite mounts) or a neat way for the snake to have instant access to food (may be feeding on termite eggs). Further studies on habitat ecology would be interesting. Even though this is a ground dwelling species, we observed it climbing on rock boulders which have crevices, indicating that this snake may be searching for geckos or their eggs for food. During floods, the snake is usually found off the floor, in trees at 1–2 m above ground level. It is also found deep inside forests, and has been observed under old coconut harnesses, decaying logs on the ground, and inside termite mounds (as mentioned earlier) set in well maintained home gardens.