Abstract
We describe a new lowland forest-dwelling species of the genus Acanthosaura from Phuket Island and the Phuket mountain range in southwestern Thailand. Acanthosaura phuketensis sp. nov., the 11th species in the genus, seems most closely related to A. crucigera from Myanmar and western Thailand and A. cardamomensis from the Cardamom Mountains, but can be differentiated from them by a combination of morphological and coloration characteristics. This new discovery stresses the importance of preserving the last forest patches remaining on Phuket Island, home to three other squamate endemics. 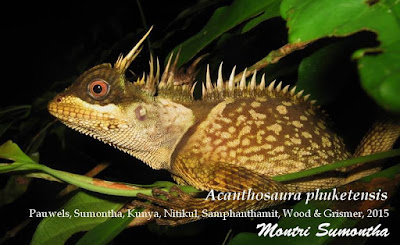 Discussion:
Our comparisons show that Acanthosaura phuketensis sp. nov. is clearly distinct from all the currently recognized species of Acanthosaura, and that it is part of the A. crucigera group, in which it seems most closely related to A. crucigera and the geographically distant A. cardamomensis. Its description is just one more step in the taxonomic review of the A. crucigera group, which is already known to include several additional undescribed species in the Thai-Malay Peninsula (Wood et al. 2010, Grismer 2011, Wood et al. in prep.). Similarly, the lepidogaster species group appears to comprise several undescribed species (Ananjeva et al. 2008), and the total number of recognized Acanthosaura species will keep increasing (Sumontha et al. in prep., Wood et al. in prep.).