[PaleoMammalogy • 2015] Waharoa ruwhenua • Anatomy, Feeding Ecology, and Ontogeny of A Transitional Baleen Whale: A New Genus and Species of Eomysticetidae (Mammalia: Cetacea) from the Oligocene of New Zealand

The Eocene history of cetacean evolution is now represented by the expansive fossil record of archaeocetes elucidating major morphofunctional shifts relating to the land to sea transition, but the change from archaeocetes to modern cetaceans is poorly established. New fossil material of the recently recognized family Eomysticetidae from the upper Oligocene Otekaike Limestone includes a new genus and species, Waharoa ruwhenua, represented by skulls and partial skeletons of an adult, juvenile, and a smaller juvenile. Ontogenetic status is confirmed by osteohistology of ribs. Waharoa ruwhenua is characterized by an elongate and narrow rostrum which retains vestigial alveoli and alveolar grooves. Palatal foramina and sulci are present only on the posterior half of the palate. The nasals are elongate, and the bony nares are positioned far anteriorly. Enormous temporal fossae are present adjacent to an elongate and narrow intertemporal region with a sharp sagittal crest. The earbones are characterized by retaining inner and outer posterior pedicles, lacking fused posterior processes, and retaining a separate accessory ossicle. Phylogenetic analysis supports inclusion of Waharoa ruwhenua within a monophyletic Eomysticetidae as the earliest diverging clade of toothless mysticetes. This eomysticetid clade also included Eomysticetus whitmorei, Micromysticetus rothauseni, Tohoraata raekohao, Tokarahia kauaeroa, Tokarahia lophocephalus, and Yamatocetus canaliculatus. Detailed study of ontogenetic change demonstrates postnatal elaboration of the sagittal and nuchal crests, elongation of the intertemporal region, inflation of the zygomatic processes, and an extreme proportional increase in rostral length. Tympanic bullae are nearly full sized during early postnatal ontogeny indicating precocial development of auditory structures, but do increase slightly in size. Positive allometry of the rostrum suggests an ontogenetic change in feeding ecology, from neonatal suckling to a more specialized adult feeding behaviour. Possible absence of baleen anteriorly, a delicate temporomandibular joint with probable synovial capsule, non-laterally deflected coronoid process, and anteroposteriorly expanded palate suggests skim feeding as likely mode of adult feeding for zooplankton. Isotopic data in concert with preservation of young juveniles suggests the continental shelf of Zealandia was an important calving ground for latitudinally migrating Oligocene baleen whales.

Type and only species: Waharoa ruwhenua.
Diagnosis of Genus: same as for the type and only known species.

Etymology: Ruwhenua, from the Maori for ru (shaking) and whenua (land), a translation of the “The Earthquakes” locality.
Type locality: “The Earthquakes,” 5 km east southeast of Duntroon, North Otago, South Island, New Zealand (Figs. 1 and 2A). 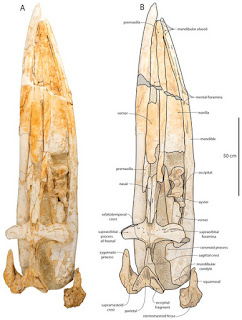 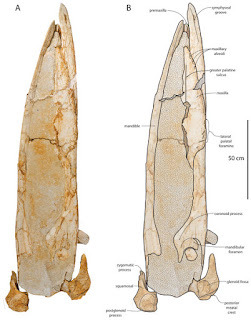 Conclusions
The new eomysticetid Waharoa ruwhenua is the first stem mysticete, and the first early neocete, for which an ontogenetic series of fossils is available for study. Amongst eomysticetids, Waharoa has a gracile skull, anteriorly oriented zygomatic processes, small periotics with a short anteroposteriorly directed and smooth posterior bullar facet, narrow and dorsoventrally shallow tympanic bullae, transversely wide atlases and axes and posterior cervicals with dorsoventrally deep vertebral foramina. External morphology, suture development, and osteohistology clearly identifies the smallest specimen (OU 22075) as a young juvenile, a slightly larger specimen as mature juvenile (OU 22163), and the holotype as an old adult. Several craniomandibular changes are noted through ontogeny, including anteroposterior lengthening of the rostrum, nasals, and mandibles, decrease in the size of the symphyseal groove, elaboration of the sagittal and nuchal crests, lengthening of the tympanic bulla, and increase in diameter of the facial canal of the periotic. Postnatal growth of the feeding apparatus is more extreme even than within modern rorquals, indicating that the long rostrum of eomysticetids is not simply a primitively inherited condition but that an elongate feeding apparatus was positively selected for. Distinct glenoid fossae indicate the presence of synovial craniomandibular joints, and in concert with the delicate posterior mandible indicate that Waharoa was likely not capable of rapid lunge feeding like rorquals. The lack of lateral palatal sulci from the anterior third of the palate may suggest the absence of baleen from the rostral terminus, perhaps forming a subrostral gap functionally analogous to that of balaenids and permitting skim feeding behavior. Osteohistology indicates that Waharoa primitively retained dense osteosclerotic ribs but lost localized pachyosteosclerosis characteristic of archaeocetes. Discovery of several juvenile Waharoa from New Zealand suggests that the continental shelf of Zealandia served as a calving ground for some of the earliest toothless mysticetes, perhaps serving as a warm-water winter habitat prior to a latitudinal migration to productive Antarctic waters. The radiation of early skim feeders such as putative late Oligocene balaenids may have contributed to the demise of Waharoa and other eomysticetids at the end of the Oligocene.