[PaleoAnthropology • 2015] Homo naledi • A New Species of the Genus Homo from the Dinaledi Chamber, South Africa 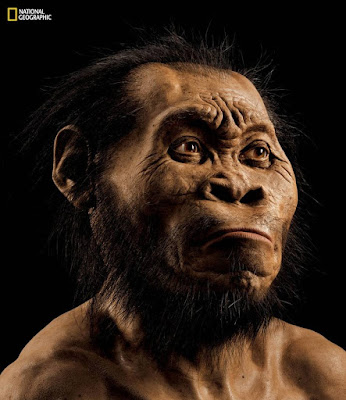 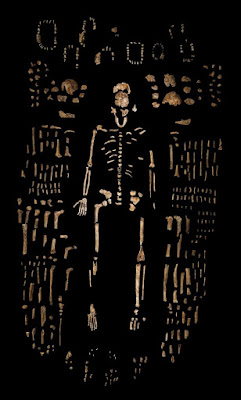 Homo naledi is a previously-unknown species of extinct hominin discovered within the Dinaledi Chamber of the Rising Star cave system, Cradle of Humankind, South Africa. This species is characterized by body mass and stature similar to small-bodied human populations but a small endocranial volume similar to australopiths. Cranial morphology of H. naledi is unique, but most similar to early Homo species including Homo erectus, Homo habilis or Homo rudolfensis. While primitive, the dentition is generally small and simple in occlusal morphology. H. naledi has humanlike manipulatory adaptations of the hand and wrist. It also exhibits a humanlike foot and lower limb. These humanlike aspects are contrasted in the postcrania with a more primitive or australopith-like trunk, shoulder, pelvis and proximal femur. Representing at least 15 individuals with most skeletal elements repeated multiple times, this is the largest assemblage of a single species of hominins yet discovered in Africa.

Etymology: The word naledi means ‘star’ in the Sotho language and refers to the Dinaledi Chamber's location within the Rising Star cave system.

Locality: The Dinaledi chamber is located approximately 30 meters underground, within the Rising Star cave system at about 26°1′13′′ S; 27°42′43′′ E. The system lies within the Malmani dolomites, approximately 800 meters southwest of the well-known site of Swartkrans in the Cradle of Humankind World Heritage Site, Gauteng Province, South Africa.

Horizon and associations:
The present sample of skeletal material from the Dinaledi Chamber was recovered during two field expeditions, in November 2013 and March 2014.

Six specimens from an ex situ context can be identified as bird bones, and few fragmentary rodent remains have been recovered within the excavation area. Neither of these faunal constituents can presently be associated with the hominin fossil collection (Dirks et al., 2015).

Aside from these limited faunal materials, the Dinaledi collection is entirely composed of hominin skeletal and dental remains. The collection so far comprises 1550 fossil hominin specimens, this number includes 1413 bone specimens and 137 isolated dental specimens; an additional 53 teeth are present in mandibular or maxillary bone specimens. Aside from the fragmentary rodent teeth, all dental crowns (n = 179) are hominin, recovered both from surface collection and excavation. Likewise, aside from the few bird elements, all morphologically informative bone specimens are clearly hominin. In all cases where elements are repeated in the sample, they are morphologically homogeneous, with variation consistent with body size and sex differences within a single population. These remains represent a minimum of 15 hominin individuals, as indicated by the repetition and presence of deciduous and adult dental elements.

The geological age of the fossils is not yet known. Excavations have thus far recovered hominin material from Unit 2 and Unit 3 in the chamber (Dirks et al., 2015). Surface-collected hominin material from the present top of Unit 3, which includes material derived from both Unit 2 and Unit 3, represents a minority of the assemblage, and is morphologically indistinguishable from material excavated from in situ within Unit 3. In addition to general morphological homogeneity including cranial shape, distinctive morphological configurations of all the recovered first metacarpals, femora, molars, lower premolars and lower canines, are identical in both surface-collected and excavated specimens (see Figure 14 later in the text). These include traits not found in any other hominin species yet described. These considerations strongly indicate that this material represents a single species, and not a commingled assemblage. 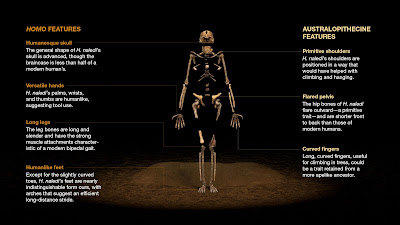 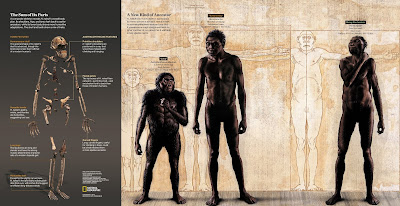 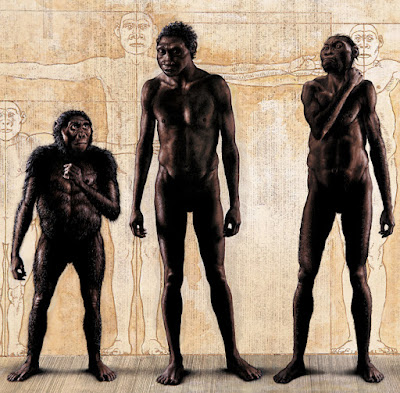 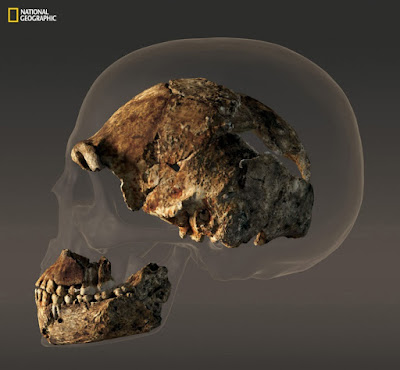 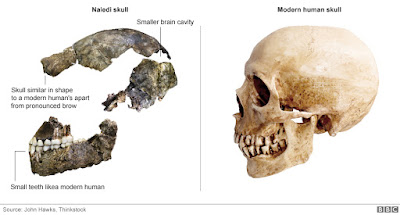 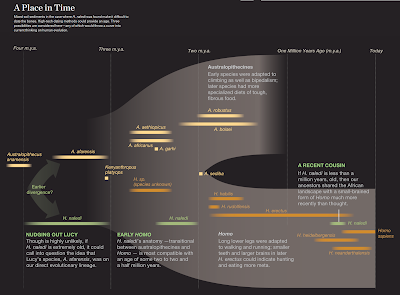 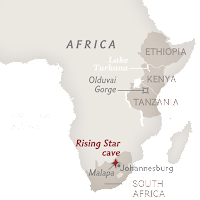 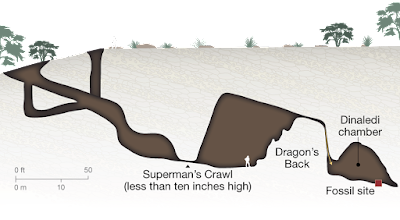 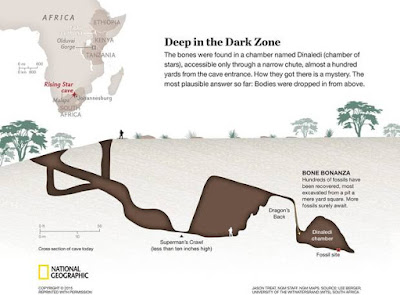 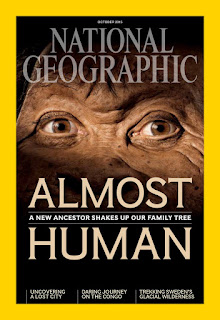 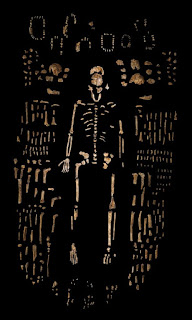 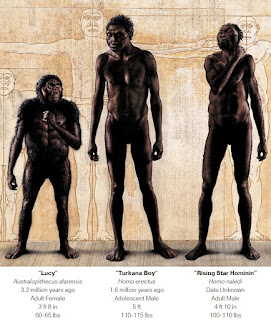 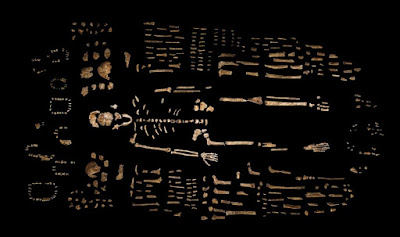 
Abstract
We describe the physical context of the Dinaledi Chamber within the Rising Star cave, South Africa, which contains the fossils of Homo naledi. Approximately 1550 specimens of hominin remains have been recovered from at least 15 individuals, representing a small portion of the total fossil content. Macro-vertebrate fossils are exclusively H. naledi, and occur within clay-rich sediments derived from in situ weathering, and exogenous clay and silt, which entered the chamber through fractures that prevented passage of coarser-grained material. The chamber was always in the dark zone, and not accessible to non-hominins. Bone taphonomy indicates that hominin individuals reached the chamber complete, with disarticulation occurring during/after deposition. Hominins accumulated over time as older laminated mudstone units and sediment along the cave floor were eroded. Preliminary evidence is consistent with deliberate body disposal in a single location, by a hominin species other than Homo sapiens, at an as-yet unknown date.

eLife digest
Modern humans, or Homo sapiens, are now the only living species in their genus. But as recently as 20,000 years ago there were other species that belonged to the genus Homo. Together with modern humans, these extinct human species, our immediate ancestors and their close relatives are collectively referred to as ‘hominins’.

Now, Dirks et al. describe an unusual collection of hominin fossils that were found within the Dinaledi Chamber in the Rising Star cave system in South Africa. The fossils all belong to a newly discovered hominin species called Homo naledi, which is described in a related study by Berger et al. The unearthed fossils are the largest collection of hominin fossils from a single species ever to be discovered in Africa, and include the remains of at least 15 individuals and multiple examples of most of the bones in the skeleton.

Dirks et al. explain that the assemblage from the Dinaledi Chamber is unusual because of the large number of fossils discovered so close together in a single chamber deep within the cave system. It is also unusual that no other large animal remains were found in the chamber, and that the bodies had not been damaged by scavengers or predators. The fossils were excavated from soft clay-rich sediments that had accumulated in the chamber over time; it also appears that the bodies were intact when they arrived in the chamber, and then started to decompose.

Dirks et al. discuss a number of explanations as to how the remains came to rest in the Dinaledi Chamber, which range from whether Homo naledi lived in the caves to whether they were brought in by predators. Most of the evidence obtained so far is largely consistent with these bodies being deliberately disposed of in this single location by the same extinct hominin species. However, a number of other explanations cannot be completely ruled out and further investigation is now needed to uncover the series of events that resulted in this unique collection of hominin fossils.