Pseudorasbora pugnax, new species, is described from the Ise Bay area in central Honshu, Japan. It is distinguished from its Japanese congener P. pumila by the absence of a dark lateral stripe (vs. presence), 33-34 (vs. 34-35) vertebrae, a comparatively more developed infraorbital canal of the cephalic lateralis system with a rostral branch present (vs. absent), a nasal canal present (vs. absent) and mandibular canal complete (vs. incomplete). It is distinguished from the sympatric P. parva, by the longer head (27.5-31.9 % SL vs. 23.5-27.3), incomplete (vs. complete) lateral line, and incomplete (vs. complete) infraorbital, supraorbital and supratemporal canals of the cephalic lateralis. Pseudorasbora pumila is redescribed and a lectotype designated. 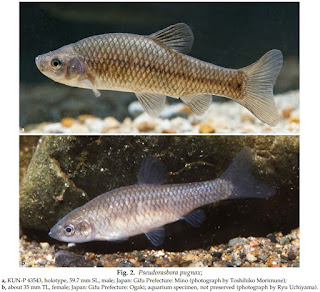