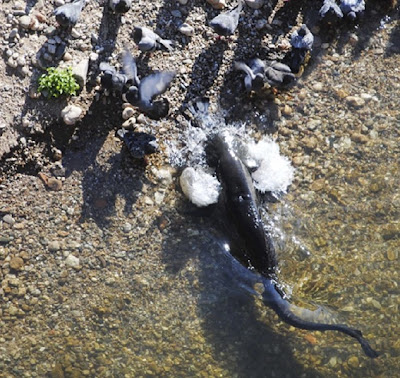 Abstract
The behavioral strategies developed by predators to capture and kill their prey are fascinating, notably for predators that forage for prey at, or beyond, the boundaries of their ecosystem. We report here the occurrence of a beaching behavior used by an alien and large-bodied freshwater predatory fish (Silurus glanis) to capture birds on land (i.e. pigeons, Columbia livia). Among a total of 45 beaching behaviors observed and filmed, 28% were successful in bird capture. Stable isotope analyses (δ13C and δ15N) of predators and their putative prey revealed a highly variable dietary contribution of land birds among individuals. Since this extreme behavior has not been reported in the native range of the species, our results suggest that some individuals in introduced predator populations may adapt their behavior to forage on novel prey in new environments, leading to behavioral and trophic specialization to actively cross the water-land interface. 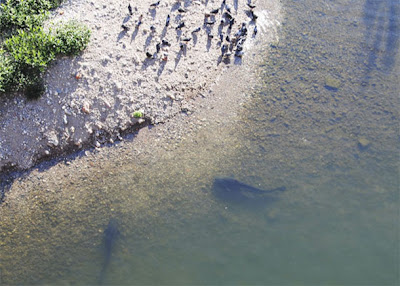 In Southwestern France, a group of fish have learned how to kill birds. As the River Tarn winds through the city of Albi, it contains a small gravel island where pigeons gather to clean and bathe. And patrolling the island are European catfish—1 to 1.5 metres long, and the largest freshwater fish on the continent. These particular catfish have taken to lunging out of the water, grabbing a pigeon, and then wriggling back into the water to swallow their prey. In the process, they temporarily strand themselves on land for a few seconds.
....... 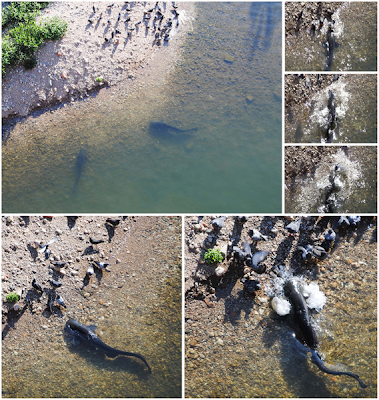 The catfish that strands itself to kill pigeons : Not Exactly Rocket Science: http://blogs.discovermagazine.com/notrocketscience/2012/12/05/the-catfish-that-strands-itself-to-kill-pigeons/