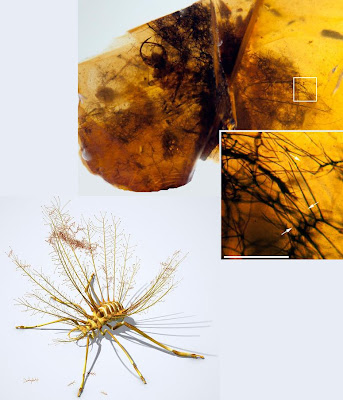 Taxa within diverse lineages select and transport exogenous materials for the purposes of camouﬂage. This adaptive behavior also occurs in insects, most famously in green lacewing larvae who nestle the trash among setigerous cuticular processes, known as trash-carrying, rendering them nearly undetectable to predators and prey, as well as forming a defensive shield. We report an exceptional discovery of a green lacewing larva in Early Cretaceous amber from Spain with specialized cuticular processes forming a dorsal basket that carry a dense trash packet. The trash packet is composed of trichomes of gleicheniacean ferns, which highlight the presence of wildﬁres in this early forest ecosystem. This discovery provides direct evidence of an early acquisition of a sophisticated behavioral suite in stasis for over 110 million years and an ancient plant–insect interaction.

Etymology. The generic name is from the Latin hallucinatus, “illusion of the mind,” after the bizarreness of the insect, and chrysa, a traditional ending of chrysopoid genus-group names, from Chrysopa (gender: feminine).

H. diogenesi sp. nov. Pérez-de la Fuente, Delclòs, Peñalver & Engel.
Etymology. The species name is a patronym for the Greek philosopher Diogenes of Sinope, whose name has been applied to a human behavioral disorder characterized by compulsive hoarding of trash. 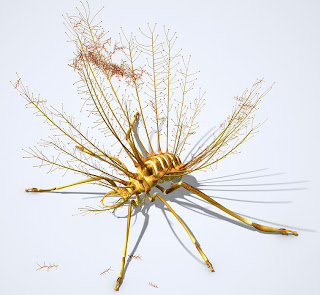 Oldest Known Insect Camouflage Dates Back 110 Million Years
U.S.-Spanish scientists have found evidence of what they say is the oldest known camouflaging behavior in insects.

the discovery of a fossil of a new insect larva species with specialized pack of plant remains.

The 4-mm-long fossil is a predatory larva of the order Neuroptera. It is covered by a tangle of plant filaments that it collected with its jaws to form a defensive shield and camouflage itself. This survival strategy, sometimes called the trash carrying, is observed in current species to render them nearly undetectable to predators and prey. It was found in a piece of amber unearthed in 2008 in the El Soplao outcrop in Cantabria, Spain, the Mesozoic’s richest and largest amber site in Europe.

“The name alludes to its ‘mind-blowing appearance and its resemblance to Diogenes syndrome, a human behavioral disorder characterized by compulsive hoarding of trash,” the scientists said.

The study identified the filamentous plant remains composing the larval trash packet as trichomes, or plant hairs with diverse shapes and functions. The trichomes are thought to belong to a specific group of ancient ferns.

Today green lacewing larvae harvest plant materials or even detritus and arthropod remains and carry them on their backs, nestled among small tubercles with hairs. On the contrary, Hallucinochrysa diogenesi possessed a bizarre characteristic: it possessed extremely elongate tubercles, with hairs that had trumpet-shaped endings acting as anchoring points. All this structure, completely unknown until now, formed a dorsal basket that retained the trash and prevented it from sliding when the insect moved.

“Hallucinochrysa diogenesi demonstrates that camouflage strategy and its necessary morphological adaptations appeared early and was well developed during the era of the dinosaurs. In the case of green lacewings, this complex behavior has been around for at least 110 million years. This is significant for evolutionary studies pertaining to animal behavior and the adaptative strategies of organisms throughout Earth’s history.” 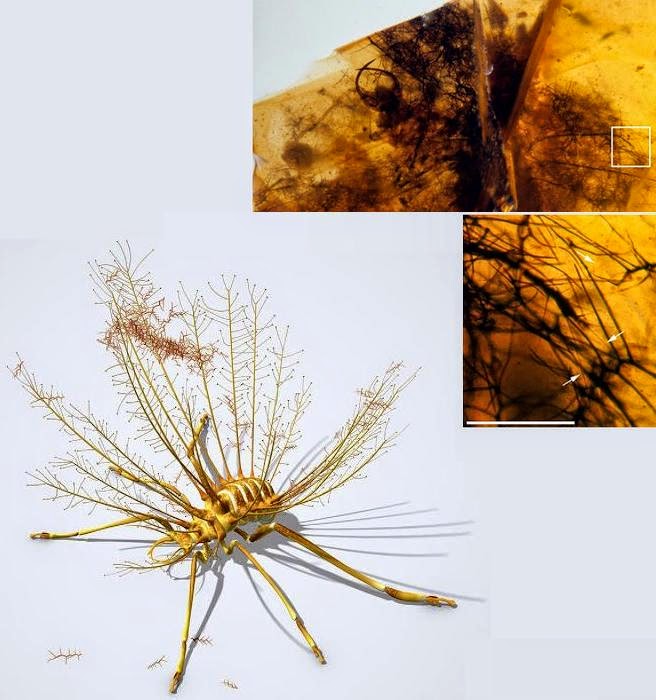