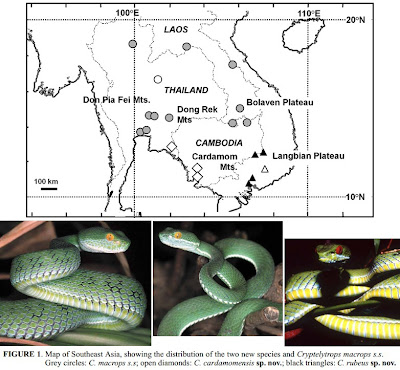 Abstract
We describe two new species of green pitviper from Southeast Asia that are morphologically similar to Cryptelytrops macrops, but can be distinguished from that species by genetic means, multivariate analysis of morphology and some aspects of coloration. Cryptelytrops cardamomensis sp. nov., is described from southeastern Thailand and the Cardamom Mountains of southwestern Cambodia. Cryptelytrops rubeus sp. nov. has been recorded from southern Vietnam and eastern Cambodia. These species have previously been confused with C. macrops, hence we also present here a redescription of this species, whose range is now restricted to Thailand, southern and central Laos, and northeastern Cambodia. All three species are present in Cambodia, but have disjunct ranges corresponding to three separate highland regions in southwestern (Cardamom Mountains), northeastern (western edge of the Kontum Plateau) and eastern (low elevation hills on the western edge of the Langbian Plateau) Cambodia for C. cardamomensis, C. macrops and C. rubeus respectively. However, there is still considerable morphological variation between geographically separated populations of C. macrops s.s., and greater sampling in southern and northern Thailand in particular may be required before the species diversity of this group is fully clarified. 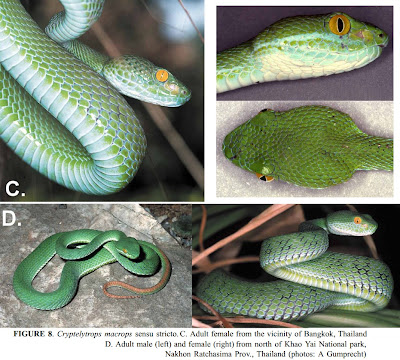 Distribution. Kramer (1977) reported the species from Thailand (Bangkok) and Vietnam, and it was presumed to occur in the intervening area. However, it is apparent that the species has a wider distribution (Fig. 1). Viravan et al. (1992) reported it from western, northern and northeastern Thailand, and although the present study has not been able to confirm its presence in western Thailand (unfortunately, the majority of specimens resulting from Viravan et al.’s study, now deposited in the Natural History Museum, London, have since lost their labels carrying the locality information), it is very likely to be present there. One adult female at the QSMI was said to have been obtained from southern Thailand via a dealer based in Thung Song. Mitochondrial DNA analysis showed that it was highly similar to  C. macrops s.s. from the Bangkok region (Genbank accession numbers AF517184, AF517219, AF517163, and AF517176). Nevertheless, the occurrence of this species in southern Thailand must remain speculative at present until it can be confirmed by the collection of additional specimens in the field. Orlov et al. (2002a) also illustrate a specimen (Fig. 20: Pg 191) of C. macrops said to be from southern Thailand. However, this specimen seems to be a misidentified male C. albolabris. The species is also present in southern (Teynié et al. 2004) and central Laos (see also “Material examined”, this paper).

Ecology. Cryptelytrops macrops s.s. occupies hilly areas up to c. 600 m. It has mainly been found in dry evergreen and mixed deciduous forest mixed with bamboo forest, but also in dry dipterocarp/grassland vegetation. Most specimens were found within a couple of metres of the ground, but occasionally up to 4 m high. Specimens were frequently found in the vicinity of water. Food items found in the digestive tracts of specimens examined included mammals (NMW 23899:4 from the Dong Rek mountains and AFS96.5 from Lampang Province, Thailand), frogs (FMNH 255252 and 255254 from Champasak and Bolikhamxai Provinces, Laos respectively; FMNH 262715 and 262716 from Stung Treng Province, Cambodia) and reptiles (FMNH 255253 from Bolikhamxai Province, Laos). 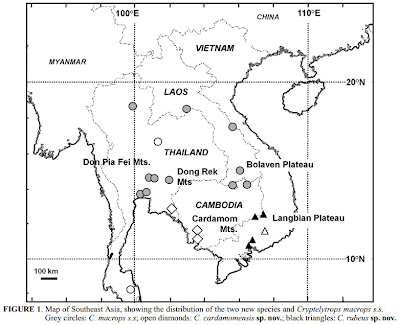