Abstract
Betta siamorientalis sp. n., a new species of fighting fish belonging to the Betta splendens group, inhabiting four provinces in the eastern Thailand, is described. The combination of slender body shape with reddish vertical bars on the black opercle and an apparent black body distinguishes the new species from other congeners especially B. imbellis. The blacker appearance relative to B. imbellis is due to a higher proportion of black body area relative to that occupied by blue/green iridescence of the scales. Based on morphological similarity and fin colour pattern and vertical bar colour on the opercle, the new species appears to be more closely related to B. imbellis and B. splendens than other members of the B. splendens group.

Distribution. Based on our extensive survey of fighting fish in sixty-seven (total of seventy-seven as of 2012) provinces, the wild B. siamorientalis sp. n. is currently found in only 4 provinces in Thailand: Chachoengsao,  Sa Kaeo, Prachin Buri, and Chon Buri (only in areas close to Chachoengsao). The eastern region of Thailand harbouring this species is shown in Fig. 4. Betta siamorientalis sp. n. is also found in Banteay Meanchey, a province of Cambodia on the eastern border of Sa Kaeo province: this may indicate an even wider and farther distribution. It is worth mentioning that in the Chon Buri province, B. siamo­rientalis sp. n. has been found only in Phanat Nikhom district which is next to Chachoengsao province, while in the eastern part of Chon Buri, that is connected to other provinces, only B. splendens has been found. 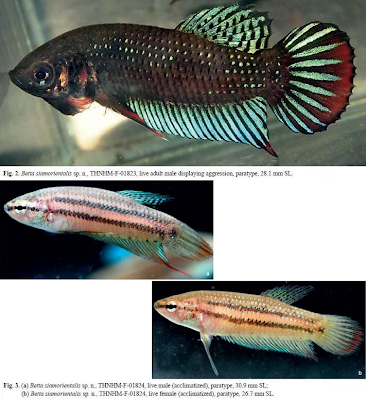 Field notes. Betta siamorientalis sp. n. was found in the shallow freshwater marshes, grass fields, and paddy fields. It was also caught at the water edge (with dense vegetation) of ponds, lagoons, ditches, canals, and others water ways. Leersia hexandra (family Poaceae) and Eleocharis dulcis (family Cyperaceae) were common in such habitats. The habitat characteristics are quite similar to those of other members of B. splendens group (see Fig. 5). Betta siamorientalis sp. n. lives in still waters and uses water plants as shelter to set up safe territory for building the bubble-nest, courtship, and hatching of fry, the same preferences as other species of the B. splendens group. Other labyrinth fishes cohabiting with B. siamorientalis sp. n. are Trichopsis vittata, Trichopsis shalleri, Trichopsis pu­mila, Trichopodus trichopterus, Anabas testudineus. Other non-labyrinth fishes sharing the same habitats are Lepidocephalichthys hasselti, Pangio anguillaris, Macrognathus siamensis, and Monopterus albus.


Etymology. The name siamorientalis is adopted as an allusion to the type locality of the new species collected in this study. It is derived from Siam, the former name of Thailand, and orientalis, a Latin version for east, the region of the country where the fish is located.