[Herpetology • 2011] Hunter–gatherers and other primates as prey, predators, and competitors of snakes | Reticulated Python Predation on Humans in the Philippines 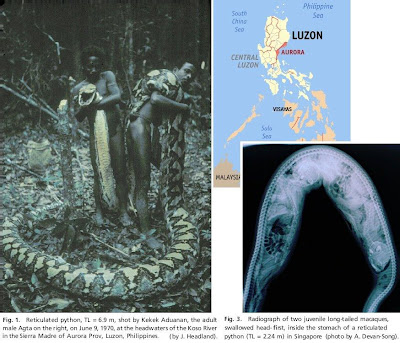 Abstract
Relationships between primates and snakes are of widespread interest from anthropological, psychological, and evolutionary perspectives, but surprisingly, little is known about the dangers that serpents have posed to people with prehistoric lifestyles and nonhuman primates. Here, we report ethnographic observations of 120 Philippine Agta Negritos when they were still preliterate hunter–gatherers, among whom 26% of adult males had survived predation attempts by reticulated pythons. Six fatal attacks occurred between 1934 and 1973. Agta ate pythons as well as deer, wild pigs, and monkeys, which are also eaten by pythons, and therefore, the two species were reciprocally prey, predators, and potential competitors. Natural history data document snake predation on tree shrews and 26 species of nonhuman primates as well as many species of primates approaching, mobbing, killing, and sometimes eating snakes. These findings, interpreted within the context of snake and primate phylogenies, corroborate the hypothesis that complex ecological interactions have long characterized our shared evolutionary history.

Thomas Headland and Harry Greene document the frequency of python attacks on a tribe of hunter-gatherers in the Philippines, this is the only study to quantify the danger that snakes pose to humans. Anthropologist Headland lived among the Agta Negritos since 1962, and interviewed 58 men and 62 women regarding their interactions with reticulated pythons. Fifteen of the men (26 percent) and one of the women (1.6 percent) had been attacked, and the interviews recalled six fatal attacks that occurred between 1934 and 1973, although Headland could only confirm two fatal attacks on children. The attacks usually occured on men while they walked in the forest, but 15 of the individuals interviewed remembered a python entering a dwelling at sunset and killing two of three children, swallowing one of them. The data compiled suggests that one tramatic or fatal attack occurs every two to three years in the Agta tribe. The report also focuses on the complex interaction between humans and snakes, so while pythons prey on humans, humans also prey on snakes. Headland documented a 6.9 m reticulated python killed, dressed in less than an hour that provided about 25 kg of meat (see photo).

Citation: Headland T. N. and H. W. Greene. 2011. Hunter–gatherers and other primates as prey, predators, and competitors of snakes. Proceedings of the National Academy of Science, early on-line doi:10.1073/pnas.1115116108