[Herpetology • 2015] The Systematics and Independent Evolution of Cave Ecomorphology in Distantly related Clades of Bent-toed Geckos (Genus Cyrtodactylus Gray, 1827) from the Mekong Delta and Islands in the Gulf of Thailand

An integrative taxonomic analysis of the distantly related Cyrtodactylus condorensis and intermedius species complexes of the Mekong Delta revealed that C. paradoxus is a junior synonym of C. condorensis and that C. thochuensis is a junior synonym of C. leegrismeri. Additionally, the analysis revealed that a cave-dwelling ecomorpholgy has evolved independently early on in the evolution of both complexes (represented by C. hontreensis in the intermedius complex and C. grismeri and C. eisenmani in the condorensis complex) and cave ecomorphs exist in sympatry—but not syntopy—with general scansorial ecomorphs. Multiple, recent, cyclical, glacioeustatic driven changes in sea levels across the Sunda Shelf are hypothesized to account for the evolution and distribution of the widely separated, conspecific insular populations of C. condorensis and C. leegrismeri. The independent evolution of cave ecomorphology is proposed to have been driven by competition avoidance. Habitat islands across the Mekong Delta are an important source of endemism and in need of protection. 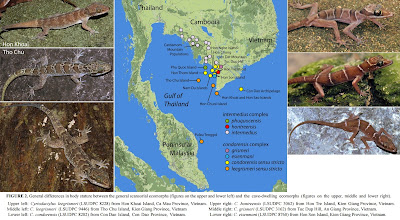