[Paleontology • 2015] Huanansaurus ganzhouensis • A New Oviraptorid Dinosaur (Dinosauria: Oviraptorosauria) from the Late Cretaceous of Southern China and Its Paleobiogeographical Implications

The Ganzhou area of Jiangxi Province, southern China is becoming one of the most productive oviraptorosaurian localities in the world. A new oviraptorid dinosaur was unearthed from the uppermost Upper Cretaceous Nanxiong Formation of Ganzhou area. It is characterized by an anterodorsally sloping occiput and quadrate (a feature shared with Citipati), a circular supratemporal fenestra that is much smaller than the lower temporal fenestra, and a dentary in which the dorsal margin above the external mandibular fenestra is strongly concave ventrally. The position of the anteroventral corner of the external naris in relation to the posterodorsal corner of the antorbital fenestra provides new insight into the craniofacial evolution of oviraptorosaurid dinosaurs. A phylogenetic analysis recovers the new taxon as closely related to the Mongolian Citipati. Six oviraptorid dinosaurs from the Nanxiong Formation (Ganzhou and Nanxiong) are distributed within three clades of the family. Each of the three clades from the Nanxiong Formation has close relatives in Inner Mongolia and Mongolia, and in both places each clade may have had a specific diet or occupied a different ecological niche. Oviraptorid dinosaurs were geographically widespread across Asia in the latest Cretaceous and were an important component of terrestrial ecosystems during this time.

Etymology: Generic name refers to “Huanan” (in Chinese Pinyin), which means southern China, because the dinosaur was discovered in Ganzhou of Jiangxi Province. The specific name refers to the locality of Ganzhou.

Type locality and horizon: In the vicinity of the Ganzhou Railway Station (GPS coordinates are provided on request from the first author), Ganzhou City; Campanian-Maastrichtian; Nanxiong Formation (Upper Cretaceous) 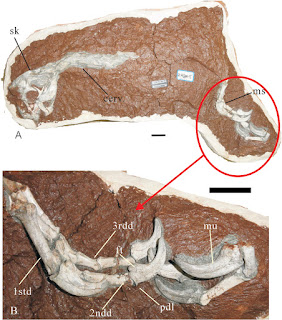 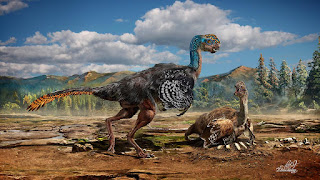 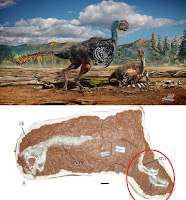