Abstract
The fossil record of ceratopsid dinosaurs between the occurrence of their proximate sister taxa in the Turonian and the beginning of their well-documented radiation from the late Campanian of North America onwards (approximately 90 and 77 Ma) is poor, with only seven taxa described from this early period in their evolution. We describe a new taxon of a highly adorned basal centrosaurine, Wendiceratops pinhornensis gen. et sp. nov., from the lower part of the Oldman Formation (middle Campanian, approximately 78-79 Ma), Alberta, Canada. Over 200 bones derived from virtually all parts of the skeleton, including multiple well-preserved specimens of the diagnostic parietosquamosal frill, were collected from a medium-density monodominant bonebed, making the new taxon one of the best-represented early ceratopsids. The new taxon is apomorphic in having epiparietals at loci 2 and 3 developed as broad-based, pachyostotic processes that are strongly procurved anterodorsally to overhang the posterior and lateral parietal rami, and an ischium with a broad, rectangular distal terminus. Although the morphology of the nasal is incompletely known, Wendiceratops is inferred to have a large, upright nasal horn located close to the orbits, which represents the oldest occurrence of this feature in Ceratopsia. Given the phylogenetic position of the new taxon within Centrosaurinae, a enlarged nasal horn is hypothesized to have arisen independently at least twice in ceratopsid evolution. 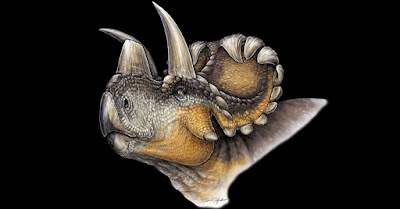 Diagnosis: Monotypic, as for species.

Etymology: The generic name honors Wendy Sloboda, who discovered the type locality, combined with ceratops (horned-face) from the Greek, a common suffix for horned dinosaur generic names. The specific epithet refers to the Pinhorn Provincial Grazing Reserve in Alberta, Canada, where the type locality is located.

Locality, horizon and age: The type locality occurs within the boundaries of the Pinhorn Provincial Grazing Reserve, south of the Milk River, County of Forty Mile No.8, Alberta, Canada. 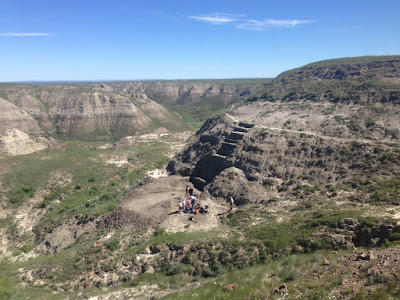 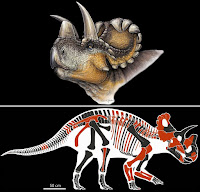