Lizards are remarkable amongst amniotes, for they display a unique mosaic of reproduction modes ranging from egg-laying to live-bearing. Within this patchwork, geckoes are believed to represent the only group to ever have produced fully calcified rigid-shelled eggs, contrasting with the ubiquitous parchment shelled-eggs observed in other lineages. However, this hypothesis relies only on observations of modern taxa and fossilised gecko-like eggshells which have never been found in association with any embryonic or parental remains. We report here the first attested fossil eggs of lizards from the Early Cretaceous of Thailand, combining hard eggshells with exquisitely preserved embryos of anguimoph (e.g. Komodo dragons, mosasaurs). These fossils shed light on an apparently rare reproduction strategy of squamates, demonstrate that the evolution of rigid-shelled eggs are not an exclusive specialization of geckoes, and suggest a high plasticity in the reproductive organs mineralizing eggshells. 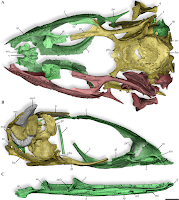 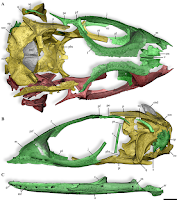 Material and Geological Setting:
The fossilized eggs presented here were surface collected by an international team led by one of us (V.S), from red siltstones of the Sao Khua Formation at the locality of Phu Phok (SK1), Sakhon Nakhorn Province, north-eastern Thailand (Fig 1). In total seven eggs have been discovered from this locality during the course of different official field campaigns of the Royal Thai Department of Mineral Resources (DMR): five eggs were discovered in 2002 and 2003 (specimen SK1-1 to SK1-5); specimen SK1-6 and SK1-7 were discovered in 2007 and 2008 respectively. As it was poorly preserved, specimen SK1-5 was thin sectioned for characterization of the eggshell. No nesting structure was observable although the eggs were scattered in the sediment over a relatively small area (about 2 sq.m). No permits were necessary. The DMR is a governmental organisation which has permission to do fieldwork upon acceptance of the land owner. The locality of Phu Phok belongs to the Thai government and therefore no permit was necessary for prospection and collection at the site. While the current legislation stipulates the necessity of permits to transport fossils out of Thailand, it was not the case at the time the fossils were collected (in 2005). Since then, the fossils have been returned to the collection of the Sirindhorn Museum in Phu Kum Khao (Sahatsakhan District, Kalasin Province, Thailand). Therefore no permits were necessary for prospection or for transportation which complied with all relevant regulations.

The Sao Khua formation is mainly characterised by floodplain deposits including sandstone, siltstone and mudstone, together with common calcretes which reflects a low-energy fluvial environment. The Sao Khua Formation is part of the Khorat Group, the latter consisting of a series of five non-marine formations deposited in a thermal sag basin during the Late Jurassic-Early Cretaceous. The accompanying fauna includes fishes, turtles, crocodilians and dinosaurs. Palynological evidence suggested a Berriasian-Barremian age for the Sao Khua Formation. A late Barremian age is indicated by freshwater bivalves. While the fauna from the older Phu Kradung Formation and the younger Khok Kruat Formation show some resemblance with their contemporaneous counterparts from Asia, the peculiar fauna of the Sao Khua Formation suggests that the Khorat region was somehow isolated from the main Eurasian continent.

The discovery of anguimorph embryos inside rigid-shelled eggs was rather unexpected as this mode of reproduction was thought to be an exclusive specialisation of gekkonid among squamates (Fig 9). The similarities observed between the rigid-shelled eggs of modern gekkonids and the Phu Phok anguimorphs are likely the result of an evolutionary convergence as leathery-shelled eggs are predominant in all other squamate clades (Fig 9). Unlike rigid-shelled eggs, eggs of most oviparous squamates present a leathery aspect which consists of a variable and thin coating of calcite overlying a fibrous shell membrane. The rigid type of eggshell presents a similar pattern but differs in having a thicker calcitic layer, allowing notably oviposition in drier environments. The squamate oviduct is known to produce eggs with variable amount of calcite, even at the intraspecific level. This modularity in calcite secretion is considered as one of the key aspects that lead to egg retention through thinning of the calcitic layer, in most major squamate clades. The Phu Phok anguimorphs, on the other hand, demonstrate that the plasticity of the oviduct bears the possibility to increase the calcitic component which occurred at least twice over the evolution of squamates. Consequently, while rigid-shelled eggs produced by squamates present a unique microstructure among amniotes, it is currently impossible to retrieve more detailed taxonomical information from fossilised isolated eggshell of squamates. 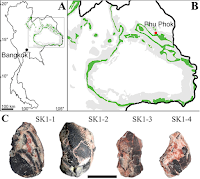 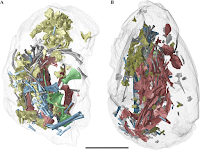