Abstract
We describe a new species of flat lizard (Platysaurus attenboroughi sp. nov.) from the Richtersveld of the Northern Cape Province of South Africa and the Fish River Canyon region of southern Namibia. This species was formerly confused with P. capensis from the Kamiesberg region of Namaqualand, South Africa. Genetic analysis based on one mtDNA and two nDNA loci found Platysaurus attenboroughi sp. nov. to be genetically divergent from P. capensis and these species can also be differentiated by a number of scalation characters, coloration and their allopatric distributions. To stabilize the taxonomy the type locality of Platysaurus capensis A. Smith 1844 is restricted to the Kamiesberg region, Namaqualand, Northern Cape Province, South Africa.

Distribution. Along the lower Orange River from Goodhouse to the Richtersveld, extending north into Namibia and recorded from the Hunsberg, Huamsib and Ploegberg mountains and the Fish River Canyon (Figure 1).

Habitat and climate. Platysaurus attenboroughi sp. nov. occurs in the arid-subtropical region of the Northern Cape Province of South Africa and southern Namibia and specifically within the Gariep Desert Bioregion (Mucina & Rutherford, 2006). This is an arid area characterized by low and erratic summer rainfall. Summers are typically hot and dry. Like all flat lizards, they are dependent on rock (mostly granite in this area) and take refuge in narrow rock fissures where they can escape suboptimal temperatures and predators. These areas are largely devoid of significant vegetation bar the occasional fig tree (Ficus) or succulent. For more detailed descriptions of climate, vegetation and topography see Mucina & Rutherford (2006).

Natural history and behaviour. In South Africa, it is mainly restricted to the Richtersveld region (Bauer & Branch, 2001; Whiting, 2014). There it is widespread and common in boulder-strewn areas and on broad rock faces, often far from river courses (e.g. Tierhoek). It does not form the high density populations recorded for P. broadleyi (MJW unpubl. data). All Platysaurus have a fixed clutch of two eggs (Broadley, 1978). The reproductive cycles of P. capensis, P. broadleyi and P. attenboroughi sp. nov. were collectively studied when these were considered a single species (Van Wyk & Mouton, 1996). The minimum size at sexual maturity is 64 mm (sex not specified); eggs are likely laid in summer (November–December) (Van Wyk & Mouton, 1996). While we know
very little about the diet of P. attenboroughi sp. nov., the closely related P. broadleyi is an omnivore and lives in similar habitat. The marked sexual dichromatism suggests a classic sexual selection system in which males compete heavily for females, as is the case in P. broadleyi (Whiting et al., 2003; Whiting et al., 2006). Males do have UV-reflective throats, which suggests a role of this colour signal in either settling contests (as in P. broadleyi) or in mate choice, although this remains to be tested. In the two males we measured, their throats had violet and blue and less pure UV than we would typically see in adult male P. broadleyi (Figure 5) (Whiting et al., 2006). Measurement of spectral reflectance in additional individuals is necessary for a proper comparison.

Etymology. We name this new species in honour of Sir David F. Attenborough (Fig. 3), in recognition of his immense contribution to the public understanding and appreciation of animals, plants, ecosystems and nature in general. David Attenborough made flat lizards, specifically the closely related Platysaurus broadleyi, famous in the BBC documentary series Life in Cold Blood. 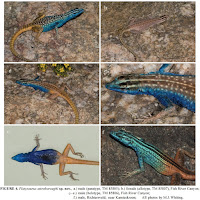 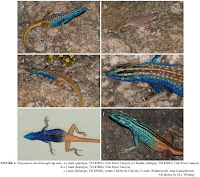 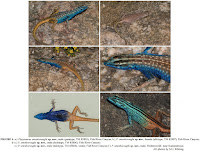