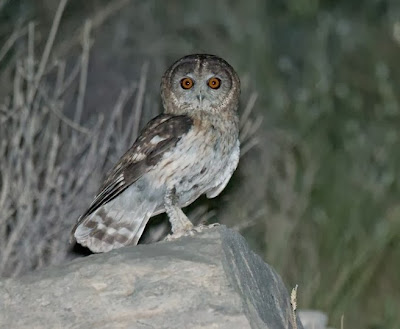 Omani Owl Strix omanensis is probably most closely related to Hume’s Owl Strix butleri. Both species share a number of morphological features which differ from other Strix species, including relatively long legs and short tail, bands on wings and tail, orangey eyes and pale underparts. Both species also occupy rather similar rocky desert habitat although, so far, Omani has only been found on high cliffs, not in shallow wadis. In this context, it is worthwhile to mention that there are no records of Hume’s in northern Oman or the United Arab Emirates (Jennings 2010, Porter & Aspinall 2010). 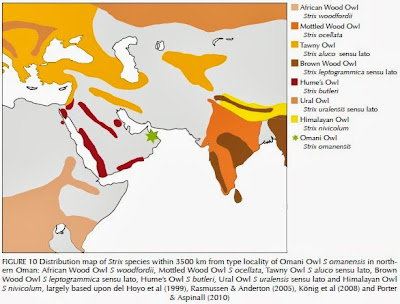 The Scottish wildlife sound-recordist, Magnus Robb, wrote Strix omanensis officially exists from Oct. 4 on the website of “The Sound Approach,” an international project aiming to record and understand bird sounds.

“Shaped like a strix owl, it [the new species] lacked ear-tufts and appeared slightly smaller-headed than a tawny owl,” Robb described the exotic owl on the project’s website.

Robb first recorded the bird’s unfamiliar hoot during an unexpected discovery in March this year.