Abstract
The current work presents a new locality for Quasipaa fasciculispina (Inger, 1970) documenting the first provincial record based on voucher specimens for Trat Province (eastern Thailand). Its geographical distribution is reviewed and a recent distribution map in Thailand is presented.

The locality lying southward from the type locality (Khao Soi Dao) is “Khao Sra Baab” according to Chan-ard (2003), but neither voucher specimens nor photographs are provided in this work. Although Chan-ard (2003) provides a live photo of this species, the photograph did not provide the locality of the frog. A herpetological study in Namtok Phliew National Park was recently conducted by Narongrit Sukprakarn, but the research failed to document Q. fasciculispina in the national park (see Sukprakarn and Nabhitabhata 2003). Moreover, the distribution in Thailand is usually claimed to range from eastern Thailand extending to the Cardamom Mountains in western Cambodia (see Chan-ard 2003). However, the record indicates that the occurrence of this species in Trat Province was in Inthara et al. (2005). Unfortunately, they did not refer to voucher specimens. Although several studies were conducted in Trat Province (e.g., Smith and Kloss 1915; Taylor and Elbel 1958; Taylor 1962; Ha-Ngam et al. 2006) unfortunately, they failed to document Q. fasciculispina.

Therefore, the current work documents the first provincial record (based on voucher specimens) for the province, and its geographical distribution of the species in Thailand is now extended southward to Trat Province. The collected site is ca. 150 km southeastern from the type locality (Figure 2). The area is a secondary forest which was been previously logged. 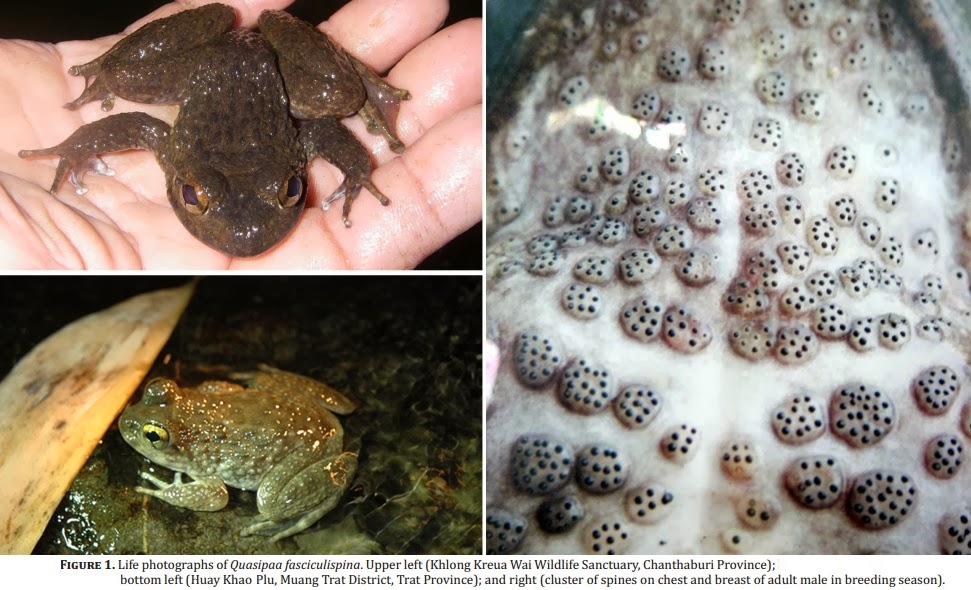 The global and local status of Quasipaa fasciculispina have the same VU evaluation according to two published works (Nabhitabhata and Chan-ard 2005; Stuart et al. 2008) and IUCN (2010). The species is protected under the WARPA law of Thailand. The species is found in protected areas (such as national parks and wildlife sanctuaries etc.) where there is strong enforcement to its conservation. However, illegal consumption still occurs and more intensive conservation strategies are needed. Further study is needed to explore the distribution range in neighboring areas. Probably additional undiscovered populations exist in the streams of a small range of mountains along the Thai-Cambodian border and also in the mountain on an island such as Koh Chang (southwestern of locality 5 in Figure 2). Other disciplines are recommended to further research: exploitation pressure, status evaluation, and frog propagation.