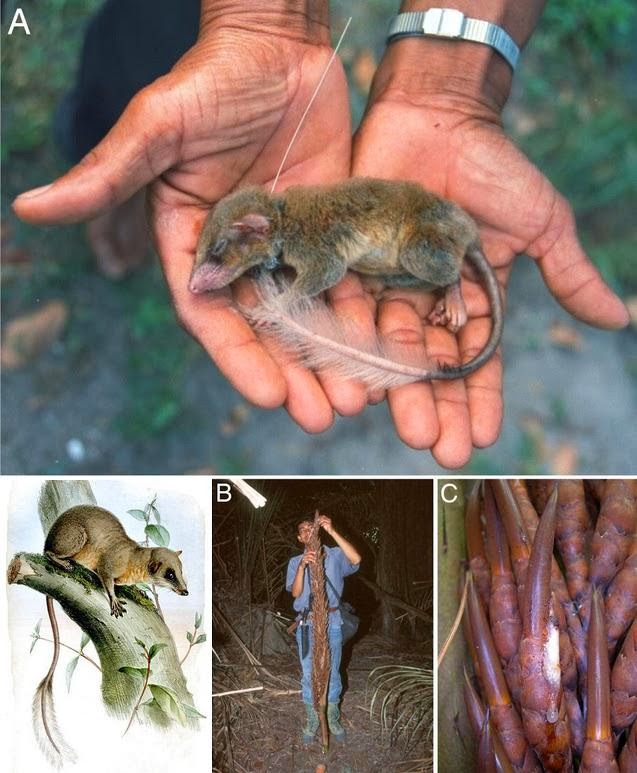 Abstract
For humans alcohol consumption often has devastating consequences. Wild mammals may also be behaviorally and physiologically challenged by alcohol in their food. Here, we provide a detailed account of chronic alcohol intake by mammals as part of a coevolved relationship with a plant. We discovered that seven mammalian species in a West Malaysian rainforest consume alcoholic nectar daily from flower buds of the bertam palm (Eugeissona tristis), which they pollinate. The 3.8% maximum alcohol concentration (mean: 0.6%; median: 0.5%) that we recorded is among the highest ever reported in a natural food. Nectar high in alcohol is facilitated by specialized flower buds that harbor a fermenting yeast community, including several species new to science. Pentailed treeshrews (Ptilocercus lowii) frequently consume alcohol doses from the inflorescences that would intoxicate humans. Yet, the flower-visiting mammals showed no signs of intoxication. Analysis of an alcohol metabolite (ethyl glucuronide) in their hair yielded concentrations higher than those in humans with similarly high alcohol intake. The pentailed treeshrew is considered a living model for extinct mammals representing the stock from which all extinct and living treeshrews and primates radiated. Therefore, we hypothesize that moderate to high alcohol intake was present early on in the evolution of these closely related lineages. It is yet unclear to what extent treeshrews benefit from ingested alcohol per se and how they mitigate the risk of continuous high blood alcohol concentrations.

Pen-tailed treeshrews (Ptilocercus lowii) consume fermented nectar on a daily basis from the flower buds of the bertam palm (Eugeissona tristis). The alcohol content of the fermented nectar averages 0.6% but gets as high as 3.8%. A proportionate amount of alcohol consumed by a human would be intoxicating but the treeshrews show no signs of intoxication.
| http://monkeysuncle.stanford.edu/?p=107
เขียนโดย pskhun ที่ 10:18 AM