Abstract
A new species of Bent-toed Gecko Cyrtodactylus guakanthanensis sp. nov. of the C. sworderi complex is described from a limestone forest in Perak, Peninsular Malaysia whose karst formations at the type locality are within an active quarry. Cyrtodactylus guakanthanensis sp. nov. can be distinguished from all other Sundaland species by having the following suite of character states: adult SVL 77.7–82.2 mm; moderately sized, conical, weakly keeled, body tubercles; tubercles present on occiput, nape, and limbs, and extend posteriorly beyond base of tail; 37–44 ventral scales; no transversely enlarged, median, subcaudal scales; proximal subdigital lamellae transversely expanded; 19–21 subdigital lamellae on fourth toe; abrupt transition between posterior and ventral femoral scales; enlarged femoral scales; no femoral or precloacal pores; precloacal groove absent; wide, dark postorbital stripes from each eye extending posteriorly to the anterior margin of the shoulder region thence forming a transverse band across the anterior margin of the shoulder region; and body bearing five (rarely four) wide, bold, dark bands. Destruction of the karst microhabitat and surrounding limestone forest will extirpate this new species from the type locality and perhaps drive it to complete extinction given that it appears to be restricted to the particular microhabitat structure of the type locality and is not widely distributed throughout the karst formations. As with plants and invertebrates, limestone forests are proving to be significant areas of high herpetological endemism and should be afforded special conservation status rather than turned into cement. 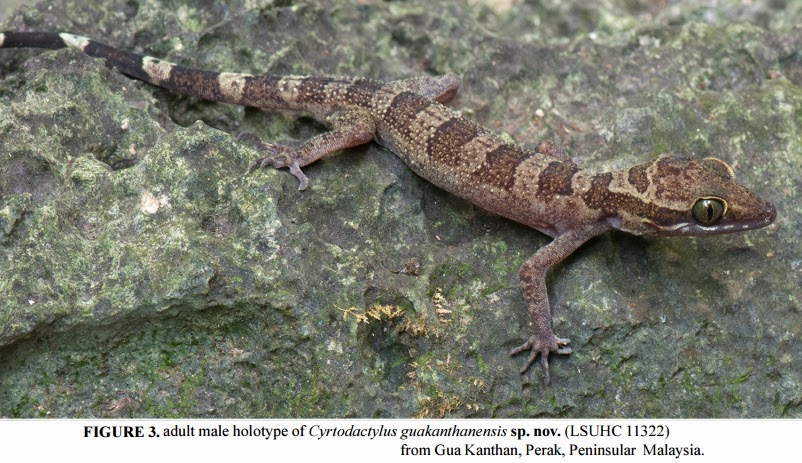 Etymology: The specific epithet guakanthanensis is an adjective and refers to the type locality Gua Kanthan (=Kanthan Cave) within the Gunung Kanthan limestone forest

Natural history: All lizards specimens were active at night on the limestone walls, adjacent boulders surrounded by limestone forest, and the limestone forest vegetation. Lizards only occurred in areas where cliff faces were eroded and exfoliated, providing cracks and holes in which to take refuge during the day (Fig. 4). No lizards were found in areas where the cliff faces were smooth and bearing no surface irregularities. Many of the specimens observed were found in the adjacent vegetation between 0.5–4 m above the ground on the trunks of trees or on vertical and horizontal branches and vines, indicating that the surrounding forest itself is an integral part of this new species’ habitat preference. One specimen was observed deep within the cave where vegetation was absent. Hatchlings as small as 33.8 mm SVL (LSUDPC 8175; Fig. 3) were observed but no gravid females were found, suggesting that the reproductive season occurred in July.

Discussion:
The Gunung Kanthan limestone forest surrounds 400 million year old limestone formations that harbor a number of unique plants and animals. Owing to the purity of its limestone, the area is scheduled to be quarried. Our data indicate that Cyrtodactylus guakanthanensis sp. nov. does not range continuously throughout the limestone forest but appears to be restricted to areas that have an eroded complex limestone microhabitat. One of the quarry zones targeted is Gua Kanthan, the type locality of C. guakanthanensis sp. nov. Grinding down the limestone in this area and cutting the surrounding forest will destroy the microhabitat to which this new species has adapted and our data indicate this species may not occur elsewhere.

The discovery of  Cyrtodactylus guakanthanensis sp. nov. adds to a growing body of evidence that karst regions should be protected and better studied. If reptiles are an indication of the hidden diversity within these unique habitats, then limestone forests may be some of the most biotically rich habitats in Peninsular Malaysia with a level of herpetological endemism approaching that of Malaysia’s islands (see Chan et al. 2010; Grismer 2008, 2011b; Grismer et al. 2011). Terminating this species before it is discovered, described, and studied is not only illogical, it is tantamount to discarding a wrapped gift before it is opened and its value assessed.