Abstract
Pleurodires are less diverse than cryptodires, together forming the two major lineages of crown turtles. Their fossil record, however, is rich. A particularly large number of fossil pleurodires, many belonging to the Podocnemidoidae, has been recovered from the Upper Cretaceous Bauru Group outcrops of south‐central Brazil. Herein we describe an additional pleurodire from this region, Amabilis uchoensis gen. et sp. nov., based on a partially preserved skull. A. uchoensis is recognized as belonging to the Podocnemidoidae by the small entrance to the antrum postoticum and completely developed cavum pterygoidei, being unique among other non‐podocnemidid podocnemidoids for its medially open fenestra postotica and absent basioccipital–opisthotic contact. Our cladistic analysis places A. uchoensis as a sister taxon to Hamadachelys + other podocnemidoids. We further explore the neuroanatomy of side‐necked turtles with the aid of micro‐computed tomography of specimens of the main pleurodiran lineages. Our data shed light on the different carotid circulation patterns in pleurodires, and we propose new phylogenetic characters to describe the neuroanatomical variation of the group. Optimization of these characters shows two independent acquisitions of a foramen for the palatal branch of the carotid in chelids and podocnemidoids, and a unique loss of the vidian nerve canal in chelids, in turtles in general. 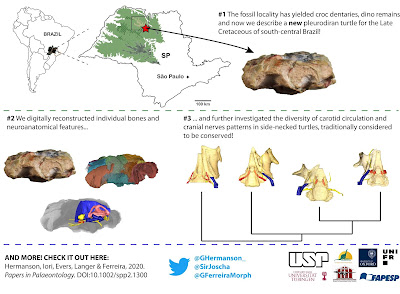 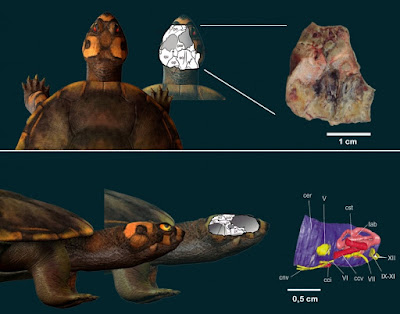 Derivation of name: Latin for ‘lovable’, for its tiny size.

Derivation of name: The name refers to Uchoa municipality, where the holotype is housed. 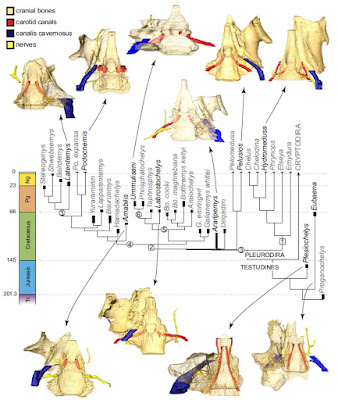 Conclusion:
The new podocnemidoid turtle from the Late Cretaceous São José do Rio Preto Formation increases the diversity of taxa on the stem‐lineage to Podocnemididae, highlighting the importance of the Bauru Group fossils in the understanding of the origins of the group (Fig. 7B). Based on an exclusive set of characters, A. uchoensis can be attributed to the Podocnemidoidae lineage. Also, based on μCT data, new characters were proposed, previous scorings were re‐interpreted, and these were included in a new phylogenetic analysis. The recovering of some of these novel characters as synapomorphic for main pleurodiran clades (e.g. Pelomedusoides, Bothremydidae) indicate that, as with other vertebrates (e.g. Coates 1999; Mennecart et al. 2017; Pierce et al. 2017), neuroanatomy reflects important phylogenetic signals also for pleurodires.

Our investigation has revealed a previously unknown variety of carotid circulation patterns in pleurodires. Among Testudines, we find a single loss of the canal for the palatal (vidian) branch of the facial nerve (VII) in chelids, as suggested by Albrecht (1976). We also mapped two independent origins of a specific foramen for the palatal branch of the carotid artery, in chelids and in the Podocnemidoidae lineage, although the origin of this foramen appears to be homoplastic across turtle lineages (Fig. 8), given that the presence of the canal varies outside crown Testudines (e.g. present in plesiochelyids and absent in baenids; Rollot et al. 2018; Evers & Benson 2019; Raselli & Anquetin 2019). Furthermore, taphrosphyine bothremydids evolved one of the most lateralized paths for the internal carotid among pleurodires, in which the canal extends virtually perpendicular to the midline axis of the skull, whereas in the majority of pleurodires (and turtles in general) the carotid enters the braincase at a much more acute angle. We hope that this contribution will serve as a basis for future surveys exploring the inner skull anatomy of a larger sample of pleurodires, broadening our understanding of the evolution of the cranial innervation and carotid systems in the group. 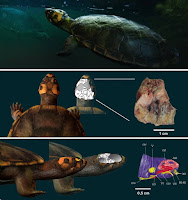