Abstract
Nepenthes fractiflexa is described as a new species from Sarawak and Kalimantan. The species is characterised by a number of unusual growth habits: plants readily produce aerial offshoots from their leaf axils, giving rise to a highly branched architecture of a complexity rarely seen in the genus; even those axillary buds not destined to develop further are activated and often elaborated into bract-like prophylls up to 5 cm long; and the inflorescence emerges close to the middle of the internode rather than from the leaf axil, as is typical of all other known species, leading us to make the first proposal for concaulescence in Nepenthes. These traits—coupled with the plant’s distinctive, long-decurrent petiolar wings and fractiflex climbing stems—distinguish it from its putative closest relative, N. mollis. The known distributions of N. fractiflexa and N. mollis are reviewed in light of recent discoveries. The apparent geographical disjunction between the two species is discussed in the context of edaphic and other ecological factors. Owing to its large range and remote, predominantly ridgetop habitat—but small number of recorded localities and individuals—the conservation status of N. fractiflexa is assessed as Near Threatened under the IUCN 3.1 criteria. 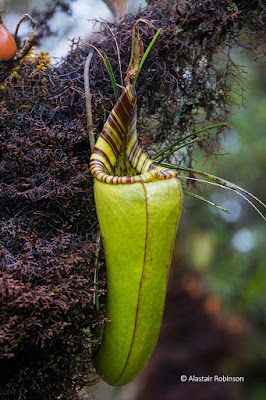 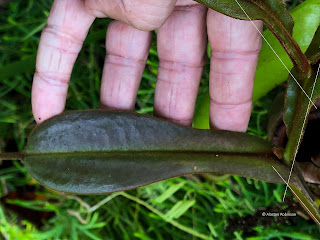