Abstract
Background and Aims: In Mexico, the Neotropical genera of Annonaceae tribe Miliuseae, including Sapranthus, Stenanona and the Mexican endemic genus Tridimeris, are particularly diverse and many of their species are endemic to this country. This diversity is not fully documented and many new species have been discovered as a result of recent botanical explorations in southern Mexico. Here, we describe a new species of Stenanona.


Methods: We collected a new species of Stenanona during field work in a little known karst forest area located in the highlands of Chiapas, Mexico. The new species was recognized using the unique combination of features through comparisons with morphologically similar species and literature review. We assessed its conservation status by calculating its extent of occurrence (EOO) and its area of occupancy (AOO) using the GeoCAT tool and applying the IUCN Red List Categories and criteria.

Key results: A new species of Annonaceae, namely Stenanona morenoi, endemic to karstic forests of southern Mexico, is described and illustrated.  According to the criteria established by the IUCN, it is possible to tentatively determine the species as Critically Endangered (CR B1ab (iii)).

Conclusions: Based on its general floral morphology, S. morenoi is hypothesized to belong to subclade A of the Desmopsis-Stenanona clade. Within this lineage, S. morenoi shares several morphological features with S. migueliana, S. stenopetala and S. zoque.

Stenanona morenoi is similar to S. migueliana Ortíz-Rodr. & G.E. Schatz, S. stenopetala (Donn. Sm.) G.E. Schatz and S. zoque Ortíz-Rodr. & Gómez-Domínguez, but it can be distinguished from these three species by the combination of 2 or 4-flowered inflorescences, partially fused sepals, cream to light yellow flowers with a red blotch at the base of the inner petals, numerous ovules per carpel and surface of the monocarps completely covered with short, golden-brown, erect hairs, resulting in a velvety texture.

Etymology: the specific epithet honors Manuel Moreno Demeza for his extraordinary work in favor of forest conservation in northern Chiapas. 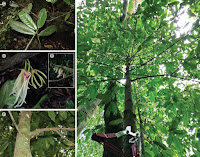 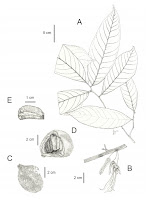