Diagnosis: Ceropegia phuchongensis differs from C. tenuicaulis in having an ovoid to globose corolla tube of 0.7–1.0 cm length and 0.6–0.9 diam. which is inflated at its mid-length. The interior of this inflated part is yellowish white with irregular purplish brown dots and stripes, and densely covered with wrinkled, whitish trichomes of 0.9– 1.5 mm length. In contrast, C. tenuicaulis has an ovoidtubular corolla tube of 1.7–2.2 cm length and 0.5–0.6 cm diam. The tube has a slightly inflated basal portion and a long narrow upper part. The interior of its inflated part is plain purplish brown and covered with scattered white trichomes of 0.7–1.4 mm length.

Distribution and habitat: Ceropegia phuchongensis is currently known from only two localities in eastern Thailand. This plant is a perennial herb growing in sandy soil among tall grasses in the open area of dry deciduous dipterocarp 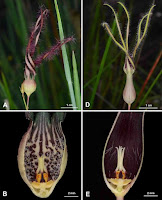 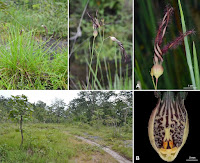