Abstract
The taxonomy of giant Galapagos tortoises (Chelonoidis spp.) is currently based primarily on morphological characters and island of origin. Over the last decade, compelling genetic evidence has accumulated for multiple independent evolutionary lineages, spurring the need for taxonomic revision. On the island of Santa Cruz there is currently a single named species, C. porteri. Recent genetic and morphological studies have shown that, within this taxon, there are two evolutionarily and spatially distinct lineages on the western and eastern sectors of the island, known as the Reserva and Cerro Fatal populations, respectively. Analyses of DNA from natural populations and museum specimens, including the type specimen for C. porteri, confirm the genetic distinctiveness of these two lineages and support elevation of the Cerro Fatal tortoises to the rank of species. In this paper, we identify DNA characters that define this new species, and infer evolutionary relationships relative to other species of Galapagos tortoises. 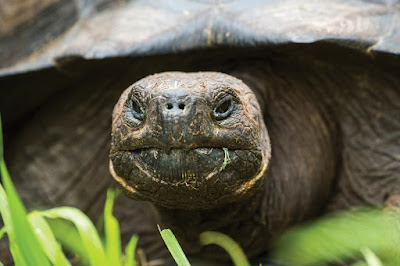 Holotype: Below we provide the morphological description of the skull from the designated C. donfaustoi holotype. This morphological description is not intended to diagnose the new species, but to clearly describe the specimen. Anatomical terms follow Gaffney (1979). Specimen UWZS 32700 is a skull (Fig 6A–6E) and single carapace marginal scute. The skull is nearly equal in basicranial length and maximum width (Table 5). The quadratojugal broadly contacts the jugal anteriorly and narrowly contacts the postorbital dorsally. Anterior edge of maxilla is rough. Posterior edge of maxilla does not extend past the contact of maxilla to jugal. In lateral view (Fig 6E) the squamosal is only narrowly visible dorsal to the quadrate and is not visible posterior to the quadrate. Dorsally the squamosal only narrowly contacts the opisthotic (Fig 6A). Contact of the pre-frontals to the frontals is broad and V-shaped, with the pre-frontal extending posteriorly forming the majority of the medial margin of the eye socket. The parietal extends nearly as far dorsally as the pre-frontal extends posteriorly and bisects the frontals. Maxilla contact with pre-frontal extends dorsally and is visible when the skull is viewed dorsally. Preootic is wider than long and does not extend posteriorly much beyond the foramen stepedio-temporale. Supraoccipital extends posteriorly well beyond the squamosal. Contact between basisphenoid and basioccipital is V-shaped with the lateral contact extending posteriorly. Vomer does not contact basisphenoid. Palatine bone much longer than wide. Prefrontal visible ventrally making contact with the palatine and vomer.

Diagnosis: The new species can be diagnosed by a combination of genetic, morphological, and geographic distribution evidence.

Genetic characters: This species can be distinguished from all other Galapagos tortoise species by allele frequency differences at 12 microsatellite loci, which allow assignment of Cerro Fatal tortoises to their own genetically distinct cluster. This cluster is as genetically divergent from the other named species as the genetic clusters grouping them. Furthermore, a set of polymorphisms in the mitochondrial control region sequence (haplotypes) is unique to the Cerro Fatal taxon (Fig 3). In particular, all individuals from Cerro Fatal share a set of nucleotides that separates them from the C. porteri (Reserva) species on the same island and from C. chathamensis (San Cristóbal), the sister taxon to the Cerro Fatal tortoises.

Morphological characters: Although there are no diagnostic morphological characters that uniquely define the new species, linear and geometric morphometric analyses reveal consistent differences in mean shell size and shape between tortoises from Reserva and Cerro Fatal. Tortoises from Reserva are larger in size and have a relatively larger carapace with higher anterior opening than the Cerro Fatal tortoises. 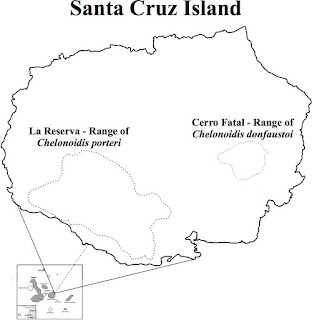 Distribution: The new species is only found on the eastern side of Santa Cruz Island occupying an area currently estimated at about 40 km2 (Fig 1).

Etymology: The new species is named in honor of Fausto Llerena Sánchez who devoted 43 years of service (1971–2014) to giant tortoise conservation as a park ranger within the Galapagos National Park Directorate. “Don Fausto” was the primary caretaker of endangered tortoises in captivity, one of the first to explore tortoise habitat throughout the archipelago, and was well known for his work ethic, commitment to tortoise conservation, and collegiality. Several tortoise lineages in Galapagos remain extant in large part due to Don Fausto’s dedication, ingenuity, and patience.

Conclusion
Genetic and morphological data confirm the existence of two tortoise species on Santa Cruz Island. We describe the tortoises from Cerro Fatal as a new species, C. donfaustoi. The recognition of C. donfaustoi as a new species has important conservation implications for both taxa. The revised taxonomy reduces the range of C. porteri, with a population of several thousand individuals, to occupying only the western and southwestern parts of Santa Cruz Island. It also confines C. donfaustoi to the eastern part of Santa Cruz Island, with a much smaller population size estimated currently at ca. 250 individuals.

From a conservation standpoint, recognition of this new species will help promote efforts to protect and restore it, given that its low abundance, small geographic range, and reduced genetic diversity make it vulnerable. In particular, further investigation is needed to better determine C. donfaustoi’s population size and structure, range, movement patterns, location of nesting zones, and habitat requirements, as well as ongoing threats and effective ways to mitigate them. In an age of increasing human occupation of much of the higher elevations on Santa Cruz Island, maintaining the two species’ biological isolation is critical. Of particular importance is ensuring that no human-mediated transport of tortoises occurs between the two sides of Santa Cruz Island given that the two species’ ranges are now linked via a single agricultural zone. 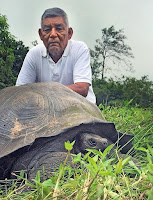