[Crustacea • 2003] Scandarma lintou • A New Genus and Species of Tree-Climbing Crab (Brachyura: Sesarmidae) from Taiwan with Notes on its Ecology and Larval Morphology

ABSTRACT
A new genus and species of sesarmid crab, Scandarma lintou, is described from Taiwan. This crab has a semi-terrestrial habit: adults and juveniles thrive in wind-protected and vegetated habitats in close vicinity of fresh water and up to one kilometer from the sea. In southern Taiwan, this species was most commonly found hiding in leaf axils or climbing on the thorny leaves of the screw pine Pandanus odoratissimus Linnaeus. During the reproductive season (June to January), ovigerous females migrate to estuaries, where small and free-swimming pelagic larvae are released into the brackish waters and probably washed into the sea. Morphologically, this species is superficially similar to species of other semi-terrestrial sesarmid genera, but differs from these taxa by the shape of the anterolateral carapace region, by the markedly flattened fingers, by the presence of a row of tubercles on the dorsal border of the dactylus, a row of ventral spines on the pollex, and a granular ridge on the dorsal face of the palm. The first zoeal stage of the new genus shows two autapomorphies in the morphology of antennae and first maxillipeds. Otherwise, this stage presents the combination of features that are typical of sesarmid zoeae, i.e. absence of lateral carapace spines, a 2,3 setation of the maxillar endopod, a 2,2,3,3 setation on the basis of the first maxilliped, and a characteristic setation pattern of antennae and telson. 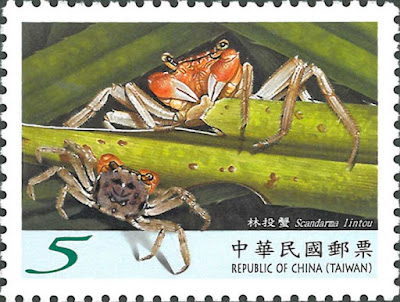 Etymology. – The name is derived from the arbitrary combination of the Latin word “scandere” for climbing and the ending of the name “Sesarma”, alluding to the tree- and rock-climbing habit of the type species. The gender of the new genus is neuter.

Etymology. – The name “lintou” corresponds to the Chinese name for the screw pine Pandanus odoratissimus. In southwestern Taiwan and Green Island this plant constitutes the favourite habitat of this crab. The name is used as a noun in apposition

Ecology. – Scandarma lintou is a semi-terrestrial (adults terrestrial) crab, usually found less than 300 m away from the sea. Along the Kangkou River, the crabs were encountered in a distance of one kilometre from the sea. In southern Taiwan and Green Island, the presence of this species is always associated with three environmental factors: 1) the close proximity of a stream or freshwater pools, 2) protection from strong winds, and 3) the presence of the screw pine or pandang Pandanus odoratissimus (Pandanales: Pandanaceae). At these localities, Scandarma lintou was found hiding in the leaf axils of P. odoratissimus at daytime, while active on the leaf surfaces of the same plant or other nearby plants at night. In eastern Taiwan, however, where P. odoratissimus is not present, Scandarma lintou finds refuge under man-made concrete blocks on the forest floor or in crevices of vertical concrete walls. Also in this case, the habitat is close to fresh water and protected from strong winds.

Scandarma lintou is a nocturnal and mostly arboreal animal. At night, it can be found climbing on leave surfaces, twigs, trunks, vines, grasses and sometimes also on the ground. It moves up trees as high as five metres. When climbing on trees, the crabs are constantly picking small food items from the surface of the plants with both of their chelae. Food items that were observed to be ingested included flowers, fruits, bark and some small invertebrates living on trees. Water availability seems to be the more important factor limiting the activity as compared to temperature: the crabs increased activity when rainfall dampened their habitat.

Scandarma lintou has a seasonal breeding, taking place from June to January. Ovigerous crabs have small eggs which hatch out into pelagic, free-swimming larvae. As the hatching approaches, ovigerous females migrate to the estuaries and release larvae into brackish water. The timing of larval release does not seem to follow lunar or semilunar periodicity. Releasing behavior could be observed throughout the month during the breeding season. The timing of larval release also does not correlate with tidal peaks. Female Scandarma lintou most abundantly released larvae in the evening hours (between 1900 and 2000 hours). It was noticed that both sexes lose their appendages by autotomy easily during handling.

Schubart, C.D., H.-C. Liu, and J.A. Cuesta. 2003. A New Genus and Species of Tree-Climbing Crab (Crustacea: Brachyura: Sesarmidae) from Taiwan with notes on its Ecology and Larval Morphology. The Raffles Bulletin of Zoology. 51(1): 49-59.
http://www.biologie.uni-regensburg.de/Zoologie/Heinze/Staff/ChristophSchubart/pdf/Raffles51-2003.pdf 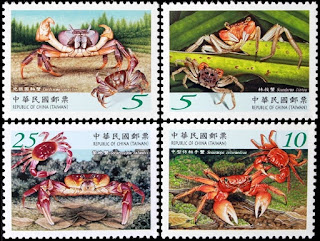 To raise understanding about our coastal wildlife and to call for the public to pay more attention to marine ecology conservation, Chunghwa Post is following up with a third set of four stamps on Taiwan’s crabs, featuring Cardisoma carnifex, Scandarma lintou, Sesarmops intermedius, and Gecarcoidea lalandii. The designs follow:

1. Cardisoma carnifex (NT$5.00): This land crab has a reddish or grayish purple carapace, yellowish cream colored abdomen and claws, and orange walking legs. It has unequal-sized claws and long, slender, flat walking legs. It burrows in swamps near estuaries, under shrubs and in the walls of fish ponds in coastal areas.

2. Scandarma lintou (NT$5.00): The color of this sesarmid crab is similar to a dry fallen leaf. It has a smooth and square carapace that is slightly wider than long. The claws are almost equal in size. With its long and slender walking legs (the third pair of which is the longest), it is an excellent tree climber. Its name is derived from the Chinese for screw pine (lintou), which is where the crab was first discovered by Dr. Liu Hung-chang.

3. Sesarmops intermedius (NT$10.00): This sesarmid crab has an almost square-shaped carapace, and slightly unequal-sized claws. Its walking legs are flat with sharp terminal joints. It is bright red to dark red in color. Therefore, it is also called Christmas crab. Every year, from May to mid-summer, when the tide is high on the Hengchun Peninsula, droves of gravid females cross coastal roads for larval release at dusk in the sea.

4. Gecarcoidea lalandii (NT$25.00): This land crab has a dark purple to reddish purple carapace, a creamy yellow abdomen, and reddish purple claws and walking legs. Its carapace is transversely ovate, with scale-like wrinkles on the sides. Its claws are equal or slightly unequal in size and its walking legs are somewhat flat. It lives in burrows in coastlines that are rocky or near coral reefs.