Abstract
Pteranodontoids consist of a diverse and cosmopolitan clade of Cretaceous pterodactyloid pterosaurs. In the Jiufotang Formation (Lower Cretaceous, Aptian) of northeastern China, pterodactyloids are represented by azhdarchoids and pteranodontoids, including istiodactylids and anhanguerians. Here, we describe a new pterosaur from this unit that represents a new species of toothed pteranodontoid. Its overall morphology is consistent with other toothed pteranodontoids but shows some interesting features such as the orbit being more ventrally positioned than in all other species from this clade. It differs markedly from all other pterosaurs from this unit, including Liaoningopterus, Guidraco and Ikrandraco, with which the new taxon is possibly related. In addition to the description of the new taxon, we also describe the anhanguerid Liaoningopterus gui in more detail. The new species, Liaoningopterus gui, Guidraco venator and Ikrandraco avatar, are large pterosaurs with very distinct tooth morphologies, suggesting that they had different prey preferences, partially explaining how the Jiufotang Formation could bear such a high diversity of pterosaur species.

Etymology: . From the Chinese words lin, meaning forest, and long, dragon; and pteros, from the Greek meaning wing. 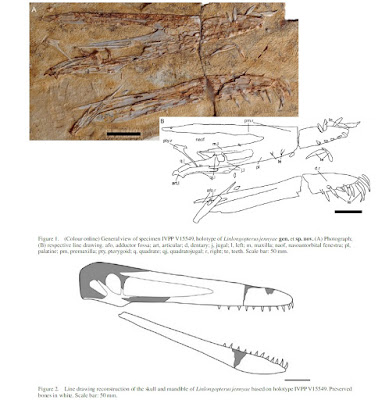 Etymology: Species name in honour of the late Elfriede Kellner, also known as Jenny, a great supporter of palaeontological studies.