Saxatilomys paulinae, a new genus and species of murid rodent in the Dacnomys Division is described. It is based on two whole specimens and 14 individuals represented by fragments recovered from owl pellets. The samples come from the Khammouan Limestone National Biodiversity Conservation Area in Khammouan Province in central Lao PDR. This tower karst landscape is part of the Quy Dat limestone massif, which extends eastward into north-central Vietnam (Binh Tri Thien Province). The new genus and species is morphologically (and probably phylogenetically) allied to species of Niviventer and Chiromyscus, which are also members of the Dacnomys Division, but its semispinous dark gray upperparts, dark frosted gray underparts, large, extremely bulbous footpads, and a combination of derived and primitive cranial and dental traits exclude it from membership in Niviventer, Chiromyscus, or any other described genus of Indo-malayan murid. The new species is likely petricolous, and is part of a small but unique community of small nonvolant mammals containing the petricolous gymnure, Hylomys megalotis, and hystricognath, Laonastes aenigmamus. All three species have been collected only in forested, rocky habitats of the Khammouan Limestone, but comparable environments in the adjacent Vietnamese portion of the Quy Dat limestone massif may harbor these same species specialized for living in forested, karstic landscapes.

ETYMOLOGY: We combine the Latin, saxatilis, meaning ‘‘among the rocks’’, with the Greek mys for mouse (or rat).

ETYMOLOGY: During frequent and lengthy visits to the Natural History Museum in London over three decades, Musser (and probably other visitors) has forgotten how many times he sat on the front steps of that historical and hallowed building waiting for the guardians of the mammal collections to arrive and escort him in. But he has never forgotten the cheery morning greeting when Paula Jenkins arrived, the walk together to the office for the great ring of keys, and her courteous efforts to install him in storage rooms, making sure everything was available for another days work. We mammalian systematists have depended upon the mammal collections and library resources of the Natural History Museum for our research, and all of us came to depend upon Paula for access to the collections and for help with innumerable problems related to locating specimens, finding the critical gazetteers and
maps, and searching library shelves for publications and field journals. We also remember the times when she had to unlock the door to a collection room because we had inadvertently locked ourselves in. We are extremely pleased to honor Paula Jenkins by attaching her name to this beautiful, gray-furred rat that is part of the spectacular and unique limestone landscape in central Lao PDR. 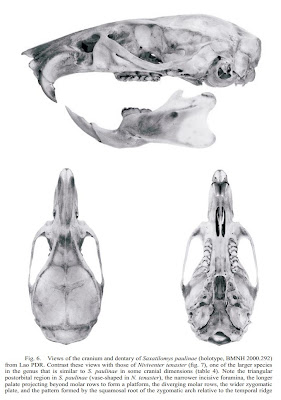 
Saxatilomys is a genus of Muridae rodent native to central Laos. It was first discovered in the Khammouan Limestone National Biodiversity Conservation Area in Khammouan Province. The name is derived from the Latin saxatilis, meaning "among the rocks" and the Greek mys meaning mouse or rat.

The genus is similar, and likely closely related, to the Niviventer and Chiromyscus genera. Saxatilomys is distinguished from these and other Indomalayan genera by "semispinous dark gray upperparts, dark frosted gray underparts, large, extremely bulbous footpads, and a combination of derived and primitive cranial and dental traits". 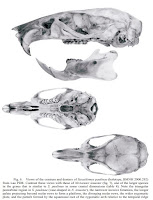